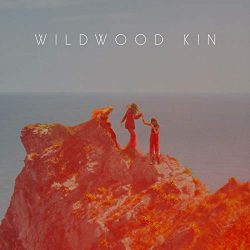 ‘Wildwood Kin’ is the eponymous second album from the Exeter based three-piece,   consisting of sisters Beth and Emilia Key and their cousin Meghann Loney. On the album, the band have co-written a number of songs with the likes of Gabrielle Aplin (‘Wake Up Sleeper’), Angelo Petraglia (‘All On Me’), Alex Davies (‘Signals’) and Ed Harcourt on the album’s opening track ‘Never Alone’, which he also produced. All the other tracks were produced by Ian Brimble.

However good the songs are, Wildwood Kin are all about the harmonies which are sublime and wrap around the listener like a gentle breeze that plays in the evening among the spices of the Sahara (to paraphrase Dr Johnson). These are familial harmonies that can only come from years of the sisters and their cousin harmonising together from childhood to everything that was in earshot, from songs on the radio, TV jingles, adverts to even the doorbell!

The songs themselves cover everything from loss and heartbreak to female empowerment and self-acceptance. However, the problem is that they tend to stick to the same formula of a gentle intro often with a solo voice, then Meghann’s drum’s kick-in to be followed by the trio’s harmony vocals as the track builds and builds often to a big, anthemic climax. By sticking to this formula for nearly every track,  there’s a certain sameness to the sound and feel of each song and none really stand out from the crowd. The band have been likened to Fleetwood Mac and there’s a certain truth to that although their harmonies echo those of The Unthanks and First Aid Kit, both of which are made up of sisters albeit with a more rock/pop feel.

This is a very radio friendly album and back in the eighties would have been categorised as  AOR (Adult Oriented Rock) on US FM stations. In this country Bob Harris is a big fan and he’ll definitely be playing it a lot as the album is perfect for his show.

‘Wildwood Kin’ isn’t a bad album at all. The songs are very listenable, and the band’s voices are angelic. It’s just a shame they and producer Brimble hadn’t taken a few chances and stretched themselves a little more instead of sticking to the formula. They say the second (or sophomore) album is the difficult one so hopefully their third album will try something a little more than the tried and tested recipe this one sticks just a little too rigidly to.

If you like warm, three part harmonies, then Wildwood Kin are the band for you