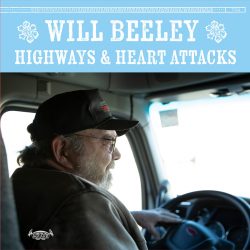 Texan trucker Will Beeley proffers his overdue follow up to his 1979 drifter ballad album. This album is as slow and considered as the big horizons and roads upon which it was written. Almost forty years after his previous and debut album, this truckin’ man creaks out a story of life on the road, Jack Daniels, and of singing lullabies to grandkids.

His voice backs up his narrative, as it cracks and purrs with its own experience of smoke and whiskey, matured in a way reminiscent of Kris Kristofferson. Unlike Kris, his recording later in life is starker because of the 40-year gap.

There is something moving about a man who has drifted his whole life commenting that “The Homeless Ain’t Just Hobos Anymore”, a subtle and beautiful moment of political backdrop. The songs have a fondness and levity which can be heard in lyrics like “I hope the sandman’s comin’ because I’m running out of nursery rhymes”, a feeling every parent can relate to. It is no surprise that it is recorded, mastered, mixed, produced, and written in Austin, with Texan signature lap steel and snare drum hissing and twanging like the hot earth and cicadas.

Will Beeley has bravely given us an album that is well-crafted and tells his story in a way that requires the patience it took to create but is well worth the time.

Texan trucker returns after forty years to share his wisdom