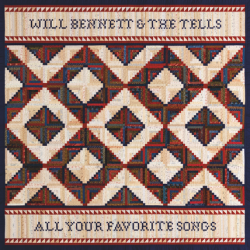 ‘Rabbitt’s’ is Will Bennett’s hometown local and the opening track from ‘All Your Favorite Songs’ reintroduces the listener to the narrative of the small-town escape. Only this time the focus is on the return journey. Grinnel, Iowa is the small town in question and having already left, formed the band and chronicled the events on debut album ‘Wichita’, the boys are now back in town.

While the reason for the return was Bennett’s father suffering a stroke, the band’s second album follows a natural path of self-determination – the analysis of what’s passed since they hit the road back in ’14 and how it feels to be back home a little older, wiser and more confident in their trade. And certainly ‘All Your Favourite Songs’ represents a more assured sound, a certainty of where they came from – if not yet perhaps fully of where they are headed. Indeed, if the barroom rock n roll of ‘Rabbitt’s’ is the story of reckless youth “marching on to Rabbitt’s one and all” then ‘Caroline’ displays a maturity of lyrical and musical heights perhaps hitherto undisplayed, as a sensitive love song but also utilising some clever alternative country beats and guitar work, all performed at speed. The Tells even address mental health issues – albeit rather unsubtly and to an early Wonderstuff jangly guitar backdrop during ‘Happy Days’ but it’s out there, and it reflects the confidence of songwriting that comes with life experience and hey, it’s a tune, man!

The confidence aspect of the Tells’ growth is perhaps best illustrated during new single ‘In Nashville’, where Bennett sings of  industry vultures and wasted talent, lost souls on Broadway playing for tips while suits get rich, and his punk sensibilities suffer no fools as what is still perhaps an unsubtle style begins to ingratiate itself with the listener as you start to have his back. There is an appealing complexity to Bennett’s approach as the aggression gives way to the wistful soul searching of ‘Just Looking’ as he sites various locations while seeking a place to settle, set to gentle acoustic strumming and pedal steel, while  ‘Linger On’ offers the counter-argument of staying on in Grinnel, a song of fate and belonging set to that signature country jangle.

Album closer and title track ‘All Your Favorite Songs’ tells of the story behind Will Bennett’s return to his small-town roots, a moving climax to a personal concept album. Along with fellow Tells’ Wilson Brehmer (guitars), Ethan Kenvarg (bass) and Daniel Martinsen (drums), Will Bennett has captured the spirit of the road on ‘All Your Favorite Songs’ and word is they’ll all be right back out there real soon.