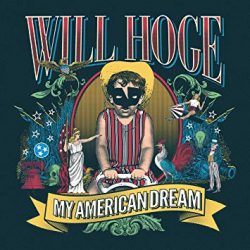 ‘My American Dream’ is the new collection of songs from Nashville singer, songwriter and musician Will Hoge: 29 minutes and eight songs over which he vents his spleen at the state of his home nation. Someone once said that a message with imagery is poetry, a message without imagery is propaganda. There is no doubt that ‘My American Dream’ comes with a fistful of imagery: try “On nights like this I sleep outside/ Under a bridge beside the Interstate/ Where I can hear those trucks drive by/ And imagine I am inside one/ Just rollin’ down the road/ But I wake up to realize/ That this place is now my home” (‘My American Dream’), and what that song  does for poverty, every other track does for some gathering crisis – ‘Gilded Cage’ for privilege and corruption, ‘Thoughts and Prayers’ for gun control.

So is it poetry? You betcha! And some of the rawest, attention-grabbing and dissentious you will find set to rock n’ roll music.  Take 2017’s ‘Anchors’ off your turntable and spin ‘My American Dream’ and the contrast is quite apparent. On ‘Anchors’ Hoge was delivering some fine social commentary on the trials and tribulations of everyday life set to mostly acoustic based roots  Americana; now he is seriously pissed off. It shows in his lyrics and in his music; both are fine, fine albums, but this one, this one, well, rocks.

The opener ‘Gilded Cage’ kicks us off sounding like Bonamassa when even the blues can’t quite touch that visceral need to connect. Hoge does though, huge spaced chords and vocals that come from deep, deep inside- it’s a terrific opener. ‘Stupid Kids’ follows with righteous venom at the denuding of dreams and resistance to change by the powerful “Turn your music up/ Sing your own damn song/ You know you got it right/ When the old white men don’t sing along”. And so it goes on, song after song. Artists are in a position where they can speak out on issues and they do – thus it ever was. But does it feel like there is a new momentum building? David Crosby on his latest tour singing ‘What are their names’ as the song ‘they hate me to sing’ with a renewed relevance; Amos Lee on his new record (reviewed on these pages), explores similar themes to Hoge around the resilience of communities to school shootings and is equally  appalled by the response of those in power. Border police get a critical appraisal here (‘The Illegal Line’) just as it figures in Alejandro Escovedo’s new record ‘The Crossing‘ (also reviewed here). ‘ Still a Southern Man’ is another song delivered with incredible passion. Any tune bearing such a title is going to attract forensic examination and the phrasing is a little Van Zandt in places and lyrically it plays a full role in the in the Skynyrd/Young debate.

You don’t have to have an eye on the global rise of populism to connect with this record. It probably helps, but it isn’t a pre-requisite. Nope, if you love your guitars alternatively jabbing, punching, ringing and lifting songs to quite euphoric levels then this is for you. Any downsides? ‘The Illegal Line’ maybe feels like it drags a fraction too much and at twenty-nine minutes there is room for another song or two, no? But enough nit-picking, this is truly an impressive release.