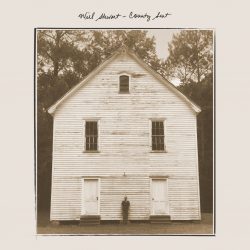 Will Stewart’s debut solo album ‘Country Seat’ explores his southern roots, with folk-rock being the foreground for the piece.  The album takes Stewart’s musical influences from many artists, including Neil Young, with the electrified moments and modern folk attraction of Hiss Golden Messenger. Stewart has called this album a love letter to the south, with the guitar being the main focal point of the music and with his vocals it allows the album to be quite an easy listening piece. The album was recorded in two days and the production does show this, it sounds very authentic and meaningful with the stripped back effect.

The first single from the album ‘Sipsey’ is a warm song that shows that Stewart just wants to reconnect with his Alabama roots and about the wonders of innocence of a young adult by rediscovering his home. The song title refers to a wilderness area in his home state, where the land has been left untouched by modern life, and place for contemplation and a simpler way of life. This is shown in the piece as he wants to reminisce.

The title track ‘Country Seat’, though it talks about day to day life, and how he reflects on a younger self, a sad lost is reflected in the piece with the line “there’s a song I once knew, couple of chords soft and blue”.

The inspiration for the album is very clear, the modern-day South, almost every aspect of the album reflect this. Everything from the guitar to the lyrics and the production. It’s quite simplistic and reflective with its lyrics and production, but the guitar and pedal steel mixed with the unique lyrics, which relate to his home state of Alabama, allow ‘Country Seat’  to tell quite a personal story. While some albums are about the high production value, this album shows how beneficial a lightly produced album can be when you have strong lyrics and great music.

Rolling Stone has called Stewart a country artist you need to know, and the sentiment is right. He is a brilliant songwriter, with a great voice. He is someone that deserves high praise for his distinguishable talent he is someone that should go far. Here’s hoping for a UK tour in the future.