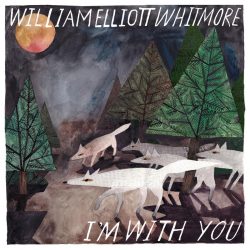 William Elliott Whitmore’s  ‘I’m With You’  is his first release of original material since 2015’s “Radium Death (ANTI-)”, and features energetic banjo playing, stomping bass drum sounds and some neat fiddle playing.  The most representative song on the album is the chugging upbeat single `My Mind Is Cruel To Me’.   Whitmore sees the piece as being “..about perception…Is the mind a separate entity from the body? At what point does it feel as though our brains are actually betraying us?”.  These are mighty metaphysical musings for a three-minute song.  This reviewer can only call on the riposte from a notorious Mancunian who sang “Does the body rule the mind or does the mind rule the body / I dunno”.

Philosophical musings on consciousness aside, the sparse instrumentation gives a jaunty busking feel to the faster songs.  ‘Put It To Use’ tells of the imperative to live with purpose to repay the legacy of those who nurtured you. `Black Iowa Dirt’ has an infectious beat and fine skirling fiddle and is made to move to.

`Solar Flare’ has strummed guitar accompaniment and provides reflections following the funeral of an old friend.  Whitmore points out that we may all be destroyed by a meteor but “..I’m satisfied by the life that I live”.  To take up the philosophical theme again, it’s an interesting thought experiment but the wider ethical impact seems to be the end of humanity. `MK Ultra Blues’ is similarly spartan with banjo accompaniment relating the story of the Cold War CIA’s experimentation with hallucinogens on civilians and soldiers.  `History’ takes up the theme and talks of the need to “..learn from their mistakes and keep a level head”.

The slower songs provide the most satisfying listening.  In particular ‘Save Ourselves’ which starts with a haunting image; the protagonist driving in the dark from an unnamed trauma with feeling in one arm and the realisation that salvation is dependent on self-reliance.  The instrumental is appropriately subdued and it finishes with a droning finish.

The material doesn’t quite lift in this album, although to borrow the phrase of a fellow AUK scribe, these songs have much twangy goodness and it’s easy to imagine the songs coming to life in a late bar.  One can only hope the single provides the occasional slurred philosophical heckle; “Materialism doesn’t take account of the transcendent nature of consciousness! Give us a bit of Wittgenstein!”