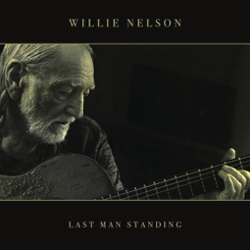 At 85 years of age Willie Nelson is still churning them out, ‘Last Man Standing’ following hot on the heels of his chart topping ‘God’s Problem Child’, released on his 84th birthday. That in itself is pretty amazing but more importantly he’s churning out music that guys half his age would give an arm and a leg for. Sure, he muses on his own mortality on the title song but he delivers it with some verve and a swampy delight, there’s no sign here of his venerable years.

The eleven songs here, all co-written with producer Buddy Cannon, are fairly typical Nelson fare, upbeat country toe tappers, gutsy outlaw workouts, dreamy ballads and some western swing. Nelson’s voice sounds as good as ever despite regular reports of health problems affecting live appearances and the band are as swell as ever with Mickey Raphael’s harmonica present and accounted for while Allison Krauss adds some fiddle and vocals. They rip into action on the opening title song which rumbles along with a swamp like vibe, organ rumbling in the background with electric guitars throbbing menacingly. Here Nelson bids farewell to his peers, “Waylon and Ray and Merle and ol’ Norro lived just as fast as me, I’ve still got a lot of good friends left and I wonder who the next will be” but does so in a joyous way ending with a promise to meet them again on the other side where, “We’ll pick and sing, load up the buses and ride.” He revisits the theme of mortality on the weeping lament of ‘Something You Get Through’ as he sings about bereavement and then on ‘Heaven Is Closed’ he strikes a defiant mood, “Heaven is closed and Hell’s overcrowded, I think I’ll just stay where I am.”  Karma meanwhile is the cornerstone of the gently loping ‘I’ll Try to do Better Next Time’, a song which recalls those on ‘Red Headed Stranger’.

Elsewhere Nelson offers us the humorous ‘Bad Breath’, a treatise on halitosis (“bad breath is better than no breath at all”), laments the current state of affairs on ‘Me and You’ and on the jaunty western swing of ‘Ready to Roar’ celebrates the age old custom of getting shit faced over the weekend. The album closes with another swampy occasion, ‘Very Far to Crawl’, with snakelike electric guitars sliding around the menacing rhythm, Nelson showing the younger whippersnappers how to play southern blues rock.

One can only hope that in a year’s time we’ll be celebrating the next Willie Nelson album but that of course is in the lap of the gods. In the meantime ‘Last Man Standing’ is another excellent addition to the catalogue of perhaps the greatest country star of them all.