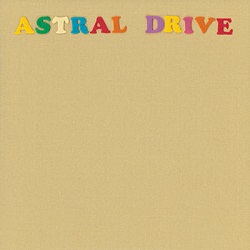 Hey, listen – do you want to know a secret? Do you..uhh…promise not to tell? Ok, you look honest. What we have here is the Original Soundtrack album for an as yet unmade (heck, it’s not even commissioned) Guardians of the Galaxy sequel movie. You can bet your proverbial bottom dollar that when the Disney people get their hands on Astral Drive’s eponymous release they’ll be story-boarding like maniacs. They’ll want some kind of inter-dimensional twist to it, as Quill floats through space into some kind of psychedelic crossover tunnel as ‘Is that our Star’ pounds out.

They’ll be playing ‘No-one Escapes’ over the zooming around starships in the big space battle. What Phil Thornally – who is pretty much the whole band on Astral Drive – has created is a missing Seventies album of glossy, cosmically connected songs which walk a fine line between ecstatic rock with endlessly multi-layered vocals and blistering guitar solos, the spaced out soul of bacofoil clad acolytes of Star Wars grooving to deep bass lines, and the songwriting skill coupled with early versions of electronic instrumentation that one associates with Andrew Gold. And it really works – and that’s because ‘Astral Drive’ is an album that revels in a formative era for its creator whilst completely rejecting the two things that can poison such a collection of songs – there is no whiff on ‘Astral Drive’ of self-indulgence, and not a single knowing-wink of the ironic parody – the nearest it ever gets to that is a snatch of a melody borrowed from Blue Oyster Cult.

Which means that there are ten tracks (eleven if the CD is purchased) that are like a crate digger’s dream – a classic album that everyone forgot to listen to. It’s all the more surprising since Thornally’s various day jobs include being Bryan Adams’ bass player (Adams contributes a sleeve photo’), and engineering and producing bands as varied as The Jam, those veritable bacofoil sci-fi soulsters Hot Chocolate, sombre young men The Cure and many others. Hot Chocolate aside, it’s all a long way from the music on this album. ‘Astral Drive’ sees Thornally creating the kind of studio wizardry music associated with Todd Rundgren – it’s wide-eyed and dreamy and reflects a pre-punk musical awakening through Pink Floyd and the Beatles. There isn’t a song to dislike on ‘Astral Drive,’  and there are some real beauties: ‘Summer of ’76’ is joyful pop shot through with sunshine, and a hint of sadness at time gone by, ‘Love is Real’ phases in and out on an ocean of vocals whilst celebrating endless love; ‘Child of the Universe’ overcomes it’s Casio keyboard intro’ to become a blissed out contemplation of the endless vastness of the possibilities in a infinite universe.  It’s an aural success.

Astral Drive want to take you to the stars. And back. Maybe. Or just out into the Cosmos.