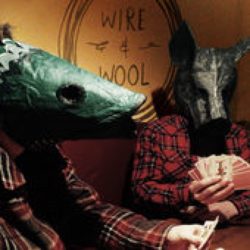 Since they were formed, Wire & Wool have won acclaim through their dynamic live performances, in and around Dundee, as well as at Celtic Connections, the Southern Fried Festival, Skye; more recently they made the leap of faith to perform at the La Roche Festival in the Alps. They wrote all the songs that bridge the gap between America’s Southern Appalachians and Scotland’s Mountains and urban bottomland of the River Dee.

The focus on living in the country, ferry landings; love separated by stretches of water and a common love of a little merriment, and with the kick of a mule love to dance them selves silly. Just when I thought I had heard of the genre pretty much all they had to offer, the listener is given a moody, bluesy fashioned “Baltimore.”

Stout folk ballad “Here I Am Again” likewise eases them away from their staple bluegrass diet; and with more fine story telling lead vocals and able accompaniment the pace slows, majestically.

Normal service quickly resumes through old sounding mountain inspired ballad, “Up In Smoke”; driven by double bass, mandolin, banjo and whisky laden, honest to goodness roving lead vocals, and you have yet more quality fiddle playing. On this occasion, I detect a likeness in the style not too dissimilar to bluegrass legend Kenny Baker (Bill Monroe). Later on Hazel Martin takes on the role of lead vocalist, and with frenetic rhythm banjo, double bass, fiddles and mandolin plus harmony vocals “The Other Side” lacks nothing in vitality.