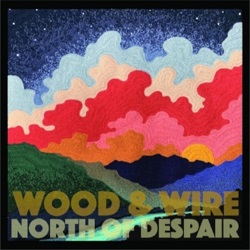 When you come right down to it that’s all that’s making this Bluegrass sound – the wood of the instruments and the wire strung across the various necks of guitar, banjo, double bass and mandolin. It’s the rawest and purest bluegrass sound palette, and Wood & Wire, the band, have a great sounding take on this strand of American folk. Naturally there are instrumental pieces – ‘Summertime Rolls‘ is a great upbeat piece of flash, showing off the lightning fast dexterity of the players – mandolinist Billy Bright, banjo player Trevor Smith, guitarist Tony Kamel and lopingly funky bassist Dom Fisher. Too good to last long, it clocks in at under two minutes in the finest bluegrass tradition. ‘Wingding‘ is a little longer and seemingly freely borrows elements of both Earl’s and Foggy Mountain’s Breakdowns.

Not that Wood & Wire are without a voice – and the strong lead is taken by Tony Kamel who has had that loud flat holler of a voice that works so well when cutting through the powerhouse playing behind him. ‘As good as it gets‘ chunk-chunks along wonderfully, as Kamel rejects false love and proclaims his vision for his future “I’m gonna get right with myself and not live with regret / I’m gonna get right I’m gonna get right / I’m a gonna get right ‘cos I know this as good as it gets“. If you’re not swaying to this one then it’s really too late for you. There’s a little more “borrowing” on ‘Awake in the Wake‘, which lifts a melody line from ‘House of the Rising Sun‘ on this tale of the power of a flood. ‘North of despair‘ strikes a jaunty moonshine swagger as the band celebrates being on the right side of Mr Micawber’s recipe for happiness : “I’m coming home with a little bit of money” sings Kamel adding that he can just float for a while as it leaves him “South of rich and North of despair“.  A change of tempo is provided by the guitar led ‘Texas‘, a western desperado’s tale of a bank robber on the lam, it adds a necessary drop of melancholic reflection to the album as endless running turns into the realisation that it’ll never be possible to go home again “I stared across the Rio Grande and I wished that I could stay / this side of the border where they live the Texas way / but I’ll travel on a branded man in sorrow all my days.”

Wood & Wire are more than your average bluegrass band down at the local hangout, there’s not the simple regurgitation of old numbers that so pointlessly mars many an otherwise good bluegrass album. ‘North of Despair‘ has some sharp writing – and some sharp playing, it’s an album anyone who loves this music will want to hear.