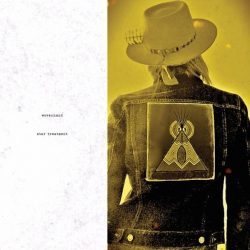 It’s to his credit that David Eugene Edwards has chosen to make his most difficult record for some while. It is midway through the third track, ‘The Hired Hand’ before the unremitting weight is leavened and this is by a chorus which is ‘give up your dead’ repeated. ‘Crystal Palace’ takes the Cure’s ‘Pornography’ as a starting point and achieves the difficult task of matching it for oppressive gloom.

There are forays into vaguely Eastern music with the tables on ‘Crook and Flail’ but as usual the real journey is into the psyche of Edwards and an exploration of the darkness that resides there. There’s not much that permeates the darkness – the songs are percussion heavy, the bass a rumbling headache and the subtle touches are lost in the storm. There’s quasi-mystical mythologising filled of portent and importance. ‘Golden Blossom’ sounds like John Fahey as played by the Southern Death Cult, here. though, at least the chord progression suggests a move towards transcendence rather than the oppression felt elsewhere. It could become the soundtrack to many a pagan wedding.

As usual the sheer physicality of the music pummels the listener into submission – where at first listen it seems like and austere unforgiving wall of music, eventually you find a way through it, following the breadcrumb trail of melodies that sit as well-protected and hidden as the meat in a scallop shell. It’s not Edwards’ best though. It’s too monolithic for that, there’s not enough variation. It leaves the ears battered and bloody and slightly afraid to go back in for more.

Wovenhand get heavy and that means heavy