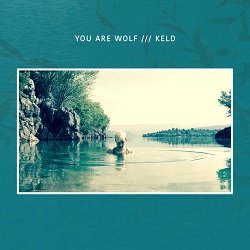 Keld is an old Northern English word meaning “the deep, still, smooth part of a river”. That’s an economical word, and You Are Wolf’s album is also economical, the sparse sounds drawing on traditional songs that have fresh water at their heart. Kerry Andrews – who is You Are Wolf – thinks that salt water has for too long dominated the folk scene – with songs of sea borne exploring, whale hunting and shanties filling album after album. What about lochs? What about rivers? What about streams and pools? ‘Keld’ is the fruit of her labours in in-land waterways. Something that becomes clear after a few listens is that seas might take one to new lands and new loves, but rivers are where bodies are dumped. ‘Down in the Willow Garden’ is a casual murder for money where courting is followed by a brutal killing: “I drew my sabre through her / it was a bloody knife / I threw her into the river / it was a horrible sight”.  ‘George Collins’ is a more supernatural slaughter – a fair maid seduces George Collins confusingly telling him that if he refuses her then he “will not live long”. Confusingly because he dies the same night, to then be borne past the home of his true love.  Unfaithfulness, it appears, is harshly punished and temptresses encountered by riversides are not to be trusted.

Cheating lovers die, but rivers are also where one wanders when a true love turns false. The simple percussive ‘While Sylvie Was Walking’ is one such example, this is a pre-Raphaelite rendering with the dewy surroundings matched by the brokenhearted Sylvie’s weeping as she contemplates a desperate act of self destruction with the only consolation on offer being that “my false love will weep for me after I’m gone”. There’s more shades of the supernatural on the long Lake District ballad ‘Witch of the Westmorlands’, where only the fey dweller in a lake can save a fatally wounded knight. With distorted drumming and traces of flutes this song strikes an effective eerie note.

Alongside some recurring themes there’s also some recurrence of musical setting. Andrews’ vocal is clear and cool as a fresh water lake, with an emotional detachment that is only heightened by the use of echoes and overdubbed backing vocals. It makes for very clear and direct music, but it can feel emotionally washed out. When You Are Wolf takes a more experimental path this can be with mixed results – ‘If Boys Could Swim’ has an extended coda that hints at underwater distortion, whilst deconstructing the song title into a litany of broken and unconnected words. The jazz-folk of ‘Dragonfly’ plays a similar trick, before adding in African communal singing to close the track out. It is, as the youth have it, rather random. ‘Keld’ is a true mixed bag – there are half a dozen intriguing reinterpretations of old songs, and half a dozen songs where the experiment doesn’t quite come off.

You Are Wolf are all about the alt-folk and water borne songs on Keld.