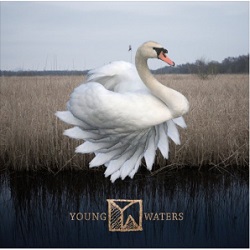 Young Waters are a five-piece folk band from Bristol led by Theo Passingham (vocals and guitar) with Kerry Ann Jangle (vocals and percussion), Liam O’Connell (double bass and vocals), Calum Smith (violin) and Rowen Elliot (viola). The preponderance of strings in the band help to create complex and emotional arrangements, over which Theo and Kerry sing in suddenly rushing and clipped duetting vocals. The songs, written by Theo Passingham, dwell on dark themes of disconnection and the bleaker side of the human condition. ‘Dust‘ treads the path from birth to death with full realisation of the inevitable, and as the strings soar, there’s a simple acknowledgement of decay being the natural order of things: “we begin to rust / return to dust“.

There’s a questioning of the ways of the world and the difficulty of finding one’s place in it on ‘Swimming Pool‘ which muses “If life is a swimming pool / how do I swim? / Something in the water makes my eyes sting so much / is it me am I the one at fault / or is there something wrong with the water?” The breaks between the vocals, which are accompanied by guitar alone, are rich and uplifting, complex arrangements beautifully played. This is pure chamber folk, with a solid English feel to it: if Fleet Foxes are heavily influenced by the Beach Boys then Young Waters frequently have the spirited release of a Fairport Convention hammering through a set of dance tunes.

Whilst the a capella traditional ballad ‘Polly Vaughn‘ breaks up the album nicely, it is ‘Weary Soul‘ that really sees Young Waters pulling all their diverse strands together with the greatest success. It’s a song that is weighed down by the strains of the world, with Passingham and Jangle harmonising on “I was born a weary soul / already tired of this world / How did I end up here?“but it’s the band’s tempo changes and strident violin and viola solos, dancing a merry jig around the misery, that push this song towards minor masterpiece status.

This is a powerful release from a band that are going to be worth watching – they have the musical chops in spades, which serve to balance out Passingham’s despairing world view.