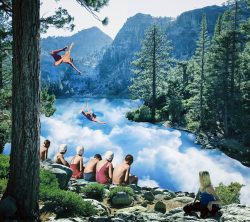 Noticing that his friends wanted something to listen to during quarantine, San Diego based singer-songwriter Zach Phillips decided to release ‘The Wine of Youth’ earlier than he first anticipated, but with his music described as ‘a hybrid of experimental roots and folk-rock, chamber pop and indie country’, you feel like this mismatch of styles don’t quite fit together throughout the album.

There are some great highlights on this album, and interestingly the standout is the first song ‘A Sky Full of Diamonds’. It is a brilliant 45-second instrumental track and feels almost standalone as it doesn’t do the job of a lot of instrumentals which feed into the first main song of the album, but it has a brilliant sound you just wish was replicated across the whole album.

‘Ladybird’ is another one of the more promising songs on the record, with a very country-feel about it. Close harmonies and a lovely little guitar riff used after every chorus helps create a really good vibe about it.

Phillips’ voice is evidently quite unique, but you start to feel as though he isn’t using it to its true potential. Some of the album feels very light, not least on ‘Spirits Rising From the Lake’, which simply sounds like any other run of the mill country/folk song that you have heard 100s of times before. Exactly the same occurs in the overly enthusiastic ode to San Diego, ‘Hey, San Diego’. ‘Cascadia’ is a song about California and its natural disasters, but again we hear Phillips’ vocals not being used to their full potential, with the instruments being a lot louder than his voice in the mix, causing him to fade into the background.

Whilst there is definite potential, this album doesn’t quite hit the right notes – with repetitive songs, it isn’t sadly one that will break boundaries in the industry.