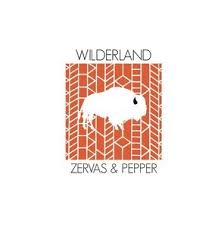 Cabin fever! Jack Kerouac spent 63 days working as a fire watch, on top of Desolation Peak in the North Cascade Mountains in 1956. Zervas & Pepper spent 28 days in a remote cabin in the Rocky Mountains of Colorado late last year. Kerouac went on to use the material gained from that experience for The Dharma Bums and Desolation Angels. Paul Zervas and Kathryn Pepper spent the time writing songs for Wilderland, their triumphant new album, and also going for long walks, enjoying the tranquillity of undisturbed absorption in nature and relishing their solitude away from the distractions of mobile phones and the internet.
It’s difficult to write about Zervas & Pepper (from here on in, known as: Zer Pepps) without mentioning their love of West Coast folk music and close vocal harmonies. They acknowledge a self-professed lifelong love of all things Laurel Canyon: CSNY, Joni Mitchell and Jackson Browne. A love that has deepened, especially since David Crosby also expressed his admiration for their music, which lead to him coming to a few gigs, after which, he put Zer Pepps in touch with his son, James Raymond, who not only has produced three of the tracks on Wilderland, but who also provides some delightful piano.

With their style and influences, one could quite easily forget that the duo are from South Wales, a country and area that has a long, proud and inspiring musical tradition. If Phil Ryan was still alive, he would adore this album. Ryan, who for many years played with Welsh legend’s Man, along with Will Youatt, formed an amazing group called The Neutrons, who were passionate about everything that came out of the West Coast. Youatt, with James Davies, then went on to form the awesome Alkatraz, based in Port Talbot – their close harmonies were phenomenal. If this was a topsy-turvy world and it was possible to go back to 1974 and play Wilderland to them on cassette in the van after one of their gigs, whilst they were relaxing in the typical South Wales musician’s way, they would bloody love it!

Armed with a food drop, their instruments, and a copy of the Collected Poems of Dafydd ap Gwilym, Zer Pepps dug down deep into themselves whilst secluded at the cabin, for the rhapsodic delights that ended up as this album; treasures such as Hotel Bible, the transcendent Universe to Find and the oh-so-emotional Mother Earth.

Mother Earth revisits a legend of Native American folk-lore which Kathryn and Paul chose for the title of this album. “It says that when the White Buffalo appears and the Black Snake crosses their land,” explains Kath, “then that is the time the tribes must come together to protect the earth. That Black Snake is believed to be at the centre of the protests at Standing Rock and the controversial Keystone XL Pipeline.” For which President Trump signed an executive order back in January, the Keystone XL Pipeline Approval Act, which confirmed construction of the oil pipeline which will slither all the way from Hardisty, Alberta, in Canada down to Port Arthur, in Texas, causing all sorts of ecological damage. Kath’s vocal is seismic; it moves you in ways that could be registered on the Richter scale for amplitude and the cardio-vascular system for its heart-warming deliciousness of melody. So powerful, you might want to go back to the cabin and have a lie-down.

Another big fan of the cabin was Henry David Thoreau, who built his own domicile right next to Walden Pond, on land owned by Ralph Waldo Emerson. It wasn’t exactly in the wilderness, it was but a wee walk to the nearby village, but after he completed its construction, pleased with himself, Thoreau wrote that: “There is some of the same fitness in a man’s building his own house that there is in a bird’s building its own nest.” Thoreau wasn’t a qualified chippy, but at times it has to be said that Zer Pepps, sound exactly like dear Karen and Richard Carpenter, who were. If this album gets taken on by Radio 2, Magic and Heart, which it should be, then Mum’s everywhere are going to love Zervas & Pepper! Our Bob is already down with them, big time.

Hotel Bible couldn’t be more like CSNY if it tried. A gorgeous guitar passage at the introduction transports you to the 1970’s, with a divine chorus and ambrosial harmony that soothes and excites in equal quantities. Paul laments that ‘I’m as lonely as a hotel bible’, the constant predicament of the touring musician. Dylan Thomas, another man who knew of the loneliness of the hotel bible, after his first US lecture tour, sought the refuge of his writer’s cabin at his house in Laugharne, where he penned this opening for his radio play Under Milkwood: “It is Spring, moonless night in the small town, starless and bible-black, the cobblestreets silent and the hunched, courters’-and- rabbits’ wood limping invisible down to the sloeblack, slow, black, crowblack, fishingboat-bobbing sea.”

There’s nothing shonky on Wilderland, this is an album of quality and distinction. Zer Pepps don’t take you from A to B, they are more igam ogam and follow their own gloriously distinctive creative course, the way one can sometimes perambulate home happily from the pub, after a few amber ales. Change Courses features Kathryn with a heart-rending vocal that perhaps touches the lodestone and energy of Sandy Denny and Who Knows Where the Time Goes which is tremendously moving, with some elegiac piano from James Raymond, supported by Paul’s rapturous harmonies and a pedal steel that provides the final ingredient in this delectable, empyrean feast.

If Zervas & Pepper do not not follow The Shires and Ward Thomas to the top of the charts with this amazing album, my flabber will be ghasted!

As Bryn and Nessa would say, that’s lush that is! Swmpus!