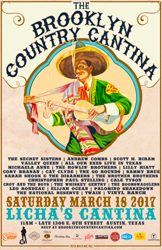 I normally advise Americana-loving friends who enquire about sxsw simply to visit Austin at any time of the year and check out venues like the Broken Spoke or the Saxon Pub to get the authentic Austin feel. You’ll be sure to see the likes of Jon Dee Graham, William Harries Graham, Bob Schneider, Darden Smith, James McMurtry and other such stalwarts of the scene. But there are certain sxsw American events that are unique to that week and are not to be missed.

The Yard Dog Gallery on South Congress has a yard at the back which is covered by a gazebo during sxsw and it is really worth spending a whole afternoon there, because the music is invariably top notch and the audience respectful and very much “up for it”. A common characteristic of all the places I shall describe is the superhuman amount of alcohol consumed. I’m by no means teetotal but I tell you, the amount these guys put away is mind-boggling. Nursing a three dollar local IPA, I was hugely entertained by a highly-wired Austin Lucas (whose Alone In Memphis always brings a lump to the throat), who also duetted with Mara Connor. END_OF_DOCUMENT_TOKEN_TO_BE_REPLACED

There are some artists who chip away at the coal face of an existing musical genre, and there are those who through the dint of their efforts take a form that is in danger of becoming moribund and predictable and give it an effective and new direction. Robert Cray is one of the latter – who shook up the blues scene in the 1980s and forty years later in 2014 topped the blues charts with his release In My Soul.   That’s probably why he’s picked up a handful of Grammys along the way as well as being noted as a favourite of Barak Obama (remember him?).  In the intervening years he’s shaped a special niche for himself – too soulful for some hardcore fans, too many touches of rock for others, but it is this striking individuality that makes him, like Eric Bibb, someone who truly crosses boundaries.  END_OF_DOCUMENT_TOKEN_TO_BE_REPLACED

And one with pictures too, like watching Nigel Farage broadcasting on LBC (but with slightly less casual fascism). Pitchfork reports: “Sufjan Stevens has announced a new audiovisual live album, Carrie & Lowell Live, due out April 28 on Asthmatic Kitty. It was recorded on November 9, 2015 at the North Charleston Performing Arts Center in South Carolina, on Sufjan’s tour in support of his last album, Carrie & Lowell. As Asthmatic Kitty points out, today… is the birthday of the titular Lowell Brams, who is Sufjan’s stepfather and co-founder of the label. It is also the two-year anniversary of the album’s release. The album will be released in both audio and video forms, with the video available on YouTube and Vimeo. The tracklist, which can be found below, features Sufjan and Gallant’s cover of Drake’s “Hotline Bling.”  END_OF_DOCUMENT_TOKEN_TO_BE_REPLACED 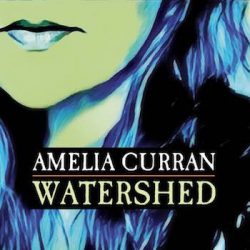 Canadian singer-songwriter Amelia Curran utilises folk, country and pop in fine fashion. Her roving artistic style showing hints of Nashville famed acts Beth Nielsen Chapman and Rosanne Cash, and on the song No More Quiet I found traces of Shawn Colvin. Such the resolute feel of the song, the listener can’t help but be impressed with her work. END_OF_DOCUMENT_TOKEN_TO_BE_REPLACED 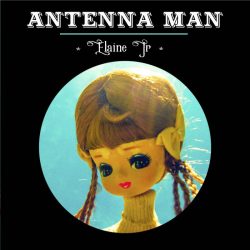 Modest indie-rock with a speckling of Americana used to be a staple of the records that we reviewed, but lately there’s been a recalibration towards authenticity, the kind that comes from beards it seems. Well Antenna Man are a welcome throwback to the days of Birddog or Earlimart, a lo-fi sound augmented with fills of piano that are like echoes of the honky-tonk and pedal steel that flickers through the songs like sunlight reflected off a CD. They use Country Music signifiers with affection and respect and with fun, so songs like I’m Your Man bounce and crackle with bonhomie. END_OF_DOCUMENT_TOKEN_TO_BE_REPLACED

Beth Bombara has built her career on an evolving sound that blurs the lines between genres. To those who make their living onstage, she’s a musician’s musician — a road warrior who writes her own exemplary material, plays multiple instruments, and fronts her own band, often a duo with her husband.

Can you tell us about yourself? Where you’re from and what you’ve been up to over the past few years? I’ve called St. Louis my home for the past 10 years. You may have heard about Ferguson, which is just 24 km from my house. Growing up in the Midwestern US, moving from Michigan (where I grew up) to Missouri exposed me to many different types of music from Detroit Rock to Ozark folk & the American roots music in between. Uncle Tupelo, Wilco, and even St. Louis blues music were things I absorbed from moving throughout the Midwest. Ever since I was old enough to drive, I’ve been loading up the car and hitting the road with other bands. I’ve played with at least 8 bands over the years, but in the past few years put more focus on writing and performing my own songs. END_OF_DOCUMENT_TOKEN_TO_BE_REPLACED

A new release from Thea Gilmore is always cause for celebration and this is the new single from her latest, Counterweight, out on June 2nd.