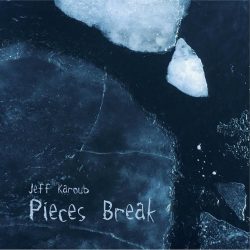 Jeff Karoub was brought up around Detroit, home of Motown, by a musical father and was immersed in roots music of different genres from a young age. On his new album, ‘Pieces Break’, Karoub is clearly influenced by that musical heritage, developing his soulful-folk and Americana sound. He sings about tuning the car radio: “Every song sounds the same and no-one wants to sing anymore,” reflecting a modern and common sense of disenchantment. In contrast, Karoub seems to make a conscious effort to ensure his songs and vocals are imbued with the best traditions of past singer-songwriters.

The album opens with the rhythmic strum of ‘Good Things-a-Coming’. Setting the tone for the whole album, it’s largely just the guitar and Karoub’s vocal, which is clean, clear, tuneful and high in the mix. This is followed by two of the album’s highlights: ‘Pieces Break’ and ‘We Are Moving’. Both of these tracks explore the album’s recurring themes of change and the passage of time, the contributions we make while we’re here and what lives on after us. Karoub sings: “Sometimes the pieces break / In such perfect shapes / They’re better left apart,” which is a good example of his knack for a smart lyrical phrasing. On the title track, the repetition of two short, simple verses is interspersed with lovely finger-picking guitar. As the song progresses, the engaging vocal tune is layered, a technique he uses well on a number of songs. The additional instrumentation on ‘We Are Moving’, and later the harmonica on ‘Prophetstown’, is more impactful because it is used sparingly.

The remaining songs are consistently well-written, evoking a strong sense of place in ‘Prophetstown’ and ‘Great Big Tire’. The latter is a reflection on the impact of time and change on his hometown: “Take a picture, ‘cause everything will change / Set the scene, embrace the frame,” and it encourages the listener to hold on to the present moment because nothing is ever as permanent as it seems. ‘Awaiting Further Light’ has a chorus reminiscent of Simon & Garfunkel and the closer, ‘Big Barn Red’, is a simple but intelligent love song in which a long-term relationship is neatly represented by an old barn that requires new coats of paint.

‘Pieces Break’ hangs together well as a whole album, thematically and musically, characterised by rhythmic strums and melodic finger-picking songs based around Karoub’s warm, tuneful singing. Karoub doesn’t attempt to be something he’s not and doesn’t try to break new ground with his songs; the songs are actually stronger for this, simply relying on good songcraft and musicianship. This is a gentle, intelligent album and an enjoyable listen.