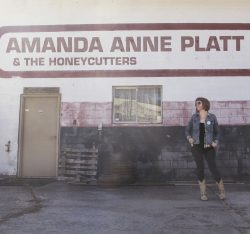 Listening to this record solidly for the last three weeks now, it still sounds as fresh and invigorating as it did the first time out. Unlike the last Honeycutters release, on this album Amanda Platt puts her name both front and centre – and given that she writes the songs and sings lead vocal, that seems only fair. The opener ‘Birthday Song’ was written on the eve of Amanda Ann Platt’s thirtieth birthday when, instead of feeling panicked about the end of her “roaring twenties” she felt grateful for being older and wiser. The lyrics reflect somewhat ruefully on the passage of time, with Platt singing about how, “Every Time It Gets Colder I Get Another Year Older / Start Looking for Lines in the Bathroom Mirror.” Ultimately, though, it’s a life affirming meditation on how time is really a gift because, “I’m just so damned glad to be here.” Marvellous stuff.

‘Long Ride,’ is almost as good, with some lovely pedal steel and piano, while ‘What We’ve Got’ maintains the same high standard, with a similar lyric; however, this time on how the benefits of ageing and a life well lived can enhance the value of a relationship: “I think about the days when I was younger / Such a selfless little thing so full of pride …/Now there’s an old man sitting in the window / He’s got an angel on his mind”. The song concludes with Amanda Platt reflecting on how, in her relationship with her current beau, she’s confident of reaching the same stage as the old man in the fullness of time.

This album has more in the way of mandolin and dobro than the last Honeycutters album ‘On The Ropes’ which was more firmly rooted in country and folk. This is perhaps best demonstrated on rockier tunes such as ‘Diamond In the Rough,’ another coming of age song, which is also a plea for kindness.

‘Eden’ is another superb story song, starting out with Platt on just an acoustic guitar – about the fate of a woman stranded in Indiana after losing her job and her husband, and how she yearns to head out into the wide blue yonder and just live the simple life. “Let me back into the garden / I won’t eat anything that’s fallen from that goddam tree.” ‘The Guitar Case,’ meanwhile, considers the jobbing life of a musician and the miles of open road to travel before the next gig. “Can you see that dim light shining? / You’d better keep on driving…”

The tempo dips somewhat for ‘Learning How to Love Him’ – it’s virtually acoustic – about how love can be even better after a relationship of 42 years has elapsed, while ‘Brand New Start’ takes the polar opposite view – that how after a tricky period of five years, a relationship requires a new beginning.

The penultimate song on the record, ‘The Things We Call Home’ has a more traditional feel, with a lush arrangement of honky tonk piano, gorgeous pedal steel, and guitar reverb. Album closer, ‘The Road’ – “I hope the road is good to you till the end” – is an elegiac sign off, for what’s a fully realised album of old-school country roots with modern rock and folk flair. Guaranteed to be one of the albums of the year.