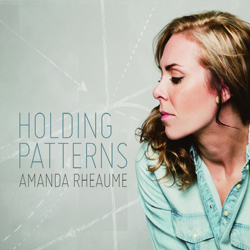 Having explored her family roots on 2014’s acclaimed Keep A Fire Ottawa’s Amanda Rheaume moves into a more mainstream sound on Holding Patterns. With producer Jim Bryson (of Weakerthans and Kathleen Edwards fame) on board the album is a classy selection of songs that run the gamut from radio friendly AOR to sensitive meditations on social issues. Very much an activist and engaged in several worthy causes locally Rheaume weaves her social conscience into the album with its central song, the deeply affecting “Red Dress” addressing the alarming situation in Canada regarding poorly investigated deaths of indigenous women (with proceeds from sales of the song as a single going to the cause).

Opening with the gilt edged guitar strums of “Get To The Part” which soon give way to a radio friendly hook Rheaume (and Bryson) manage to avoid drowning in a generic sub Fleetwood Mac breeze, a neat key change mid song and delicious guitar solo towards the end lifting it up. A tropical pitter patter of drums introduces “Mind Over Matter” with Rheaume inhabiting the singer songwriter world of the likes of Suzanne Vega and the album kind of seesaws from then on. Breezy soft rock as on “Time To Land”, “Beat The Rain” and “Wolf of Time” has a bite in the lyrics while there’s a cantankerous biliousness on the clang and clamour of “Blood From A Stone” with its cross cut guitars and bluesy harmonica. “The Day The Mountain Fell” is a slight throwback to the previous album as Rheaume recounts the story of an infant cousin who survived a mudslide while “All That You Need” is a wintry rumination on forgetting the past and marshalling one’s strengths. Here Rheaume is in magnificent voice while the arrangement is sublime.