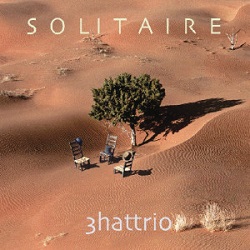 I’d never be one to suggest that experimentation is of itself not a good thing, and 3hattrio’s music does offer something new – their blend of elements of roots Americana with a modern jazz sensibility and an affection for sound effects is certainly removed from the mainstream. But, as Doctor Frankenstein discovered, not all experiments are an unqualified success. So, whilst Texas Time Traveller will do little to shock those who have followed Howe Gelb’s more out there compositions and extended improvisations, 3hattrios banjo led bluegrass version of “Get Up Stand Up” may raise a few eyebrows. Marley and Tosh wrote a song that’s strong enough to survive the harshest reshaping but this smacks of “doing it because we can” and the additional voodoo scat mumblings of Greg Istock really add little. They work better on his own compositions like “Mojave” and “Should I” which have more than a nod, albeit a bluegrassed one, towards Dr John’s Gris-Gris.

“Solitaire” – the third album by 3hattrio – is a concept album drawing inspiration from the writings of Edward Abbey about his sojourns in the western desert. The band have said that they wanted to catch the sparkling light of dawn breaking in the open, but not empty, desert, doing this with a blend of fiddle, banjo distorted electric guitar, upright bass and percussion. The band’s two songwriters Greg Istock and Hal Cannon have very different styles. Greg Istock sometimes recalls Willy Vlautin’s descriptive writing whilst Cannon is more in touch with the poetry of the cowboy song – exemplified by his wonderful “Range” : “Jack-rabbit darts / Blue grouse starts / The roll of some distant thunder / He can’t stay long / He’s moving along / That’s how it is on the Range”. This direct approach both in words and delivery is a little like Tom Russell, and that’s certainly a sound that I can hear more of.

At its best – like their version of the traditional “Bury me not” – 3hattrio produce what sounds like the soundtrack of an unmade new-age western – coupling sparse and echoey music evoking the endless, empty desert with Hal Cannon’s deep baritone growl which simply exhales menace. There’s definitely a direction to “Solitaire” and some memorable moments, but too often it falls short of the band’s ambitions.

About Jonathan Aird 1346 Articles
Sure, I could climb high in a tree, or go to Skye on my holiday. I could be happy. All I really want is the excitement of first hearing The Byrds, the amazement of decades of Dylan's music, or the thrill of seeing a band like The Long Ryders live. That's not much to ask, is it?