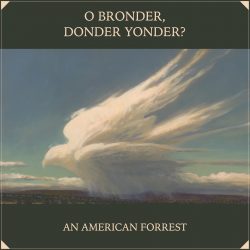 If you ever needed a case study to argue that an album’s backstory is sometimes as striking as the music itself, then ‘O Bronder, Donder Yonder’ wouldn’t be a bad place to start. Forrest Van Tuyl – that’s the singer-songwriter who is An American Forrest – currently spends nearly six months of every year working in the Northeastern Oregon wilderness, much of it on horseback, guiding mule-trains over mountain trails. That off-the-beaten-track (in more senses than one) experience as a modern-day cowboy acts as the musical and lyrical backbone for ‘O Bronder, Donder Yonder’, melded into a sound with strong resonances of 1970s Outlaw Country, straight-up classic country music and – last but not least – the Appalachian bluegrass of Gillian Welch. (As Van Tuyl, perhaps slightly wryly, comments to AUK about Welch, “We tend to steal from a lot of the same places.”)

However, what ‘O Bronder, Donder Yonder’ transmits most tellingly of all is how An American Forrest relates to America’s great outdoors, through a host of short, punchy, but intensely sensitive songs like ‘Pendleton Overcoat’. Van Tuyl describes ‘Pendleton Overcoat’ as “a song to sing to your lover in a cabin in the middle of nowhere” and for all that it dates from 2012 and, as such, is the oldest song in his setlist, the deliciously warmhearted, intricate interplay between two acoustic guitars sounds anything but rusty or dated. There’s space on the album for soaring full-blown country anthems like ‘Lady Godiva,’ a lament for a lost love, which has, amongst other qualities, a pretty neat harmonica solo. More typically concise tracks, like ‘Yonder My Love’, are spun with a kind of finely crafted, near-cosmic, uncertainty, asking a lover, “Are you off ridin’ some unfenced horizon? Are your stars yet unsung?”

But quite apart from the cowboy poetry – crammed with interesting, offbeat literary references that offer some interesting sidetrails of their own – and the solid, accomplished country music arrangements, what arguably gives ‘O Bronder, Donder Yonder‘ its strongest sense of being ‘out there’ in Oregon’s wide open spaces are the more homespun, folksy, songs like ‘Burnin’ Starlight’. Here, Van Tuyl recounts riding for hours on mountain trails on horseback in the pitch dark – as he puts it, “A surreal sensation because the horse can see the trail, and knows it’s going home, but you can’t.” Quirky asides on the song such as, “it’s as dark as a cow’s insides” are exactly the kind of unromantic image that somebody from out in the sticks – as this reviewer, who grew up in darkest rural 1970s Devon, knows only too well – would use to describe that particular situation. In the process, they’re images that shift the album’s authentic ‘feel’ onto an even higher level.

To put it briefly, ‘O Bronder, Donder Yonder’ doesn’t just transport you out into the American wilderness and tell you what it feels like to be there. It also leaves you itching to find out what more musical gems An American Forrest will have in his saddlepack next time he rides in from the Oregon trails.