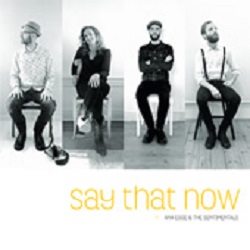 Ana Egge has a collaborative nature – she has recorded with the likes of Steve Earle and Ron Sexsmith; her last album had The Stray Birds backing her up and on Say That Now she’s gone back to her Danish roots recording in Denmark with folk-rockers The Sentimentals. And again it’s a full collaboration – amongst the self-penned songs there are also co-writes with Jacob Chano (drums), Nikolaj Wolf (bass) and M C Hansen (guitars) – and even one song credited just to Hansen. An integrated group of musicians, then, sparking off one another and freely giving room for all to breath. The result is a set of literate songs in a generally light-touch folk rocking style covering subjects such as love and longing (falling, falling, falling), the thoughts of the mother of a murderous son (He’s a killer now) and institutionalised racism (Away we go). That’s pretty diverse by anyone’s standards.

Starting from a high energy position on Take Off My Dress, which is reminiscent of the current incarnation of Larkin Poe, there’s a rapid switch to the country balladeering of Promises to break.  Ana Egge’s vocals can sometimes be quite like Diana Jones – and He’s a Killer Now epitomises this at the same time taking that country ballad style into a far darker place. There’s a spate of mal de mer as we reach midway through the album – The Girl from the Banks of Ohio part references Dylan with its opening lines “another sea sick sailor / looking back on the shore” whilst the next up – and title song – starts with “you’re sea sick from sailing / trying to tame the ocean”.  Now this could be a juxtaposition of views from different moments in time – the first song seen from the perspective of the girl left behind longing for her man and, incidentally, worrying that she cannot wait forever. The second has a protagonist resigned to loneliness and admitting to her suitor back on the shore that she doubts that their love can endure.  It could be that and not just slightly clumsy sequencing of the songs. Either way it jars every time I’ve sailed through this pair of songs.

Good band, good voice, mostly good lyrics and musically varied within reasonable limits. And yet…there’s a spark that’s just not there. Even with the presence of some “heavier” topics Say That Now just sounds a little too comfortable, and even content. The fire’s not there, which is a shame.

Rousing herself from the homely cosyness of life with her wife and daughter, Ana Egge delivers a credible set of thoughtful songs.