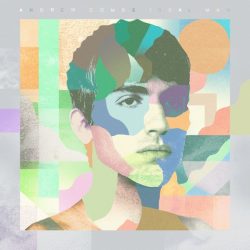 This is a very interesting album – not least because it’s asking you to expand the concept of what you consider “Americana”; and we’re not just talking about a bit of pop sensibility or some string washes. Combs is a Nashville based singer/songwriter, originally from Dallas Texas, and “Ideal Man” is his fourth studio album. Early comparisons, especially following his 2010 debut E.P. (“Tennessee Time”), likened him to Gene Clark and Mickey Newbury – and it’s easy to hear why when you listen to some of the cuts on this album. Songs like ‘Firestarter’ and album closer ‘You’re Like the Country’ are strong, narrative songs with great lyrical content and simple, tuneful melodies. Elsewhere on this album things get a little less identifiable and you might start to feel like Alice dropping down the rabbit hole!
The album kicks off with ‘Stars of Longing’ and it’s quite a statement of intent. Crashing drums and muscular guitar give way to a voice drenched in reverb over a chugging beat. The guitar work on this track is excellent, courtesy of long-time collaborator Jerry Bernhardt, and it’s a great start to an increasingly interesting collection of songs. On first listening the album comes across as more of an Indie Rock sound and even incorporates nods to psychedelia in the production but, the more you listen, the more you hear Combs’ country roots and a strong vein of Americana running through this collection. Breaking with his more traditional approach to recording, ‘Ideal Man’ was recorded live in producer Sam Cohen’s Jupiter recording studio in Brooklyn, giving the recording a more open sound that really suits these songs; Combs now lives in Nashville but the album does have something of an East Coast vibe about it that would’ve been hard to achieve in the home of Country music and his decision to record in New York would seem to have paid dividends.

Combs credits two new inspirations for the direction that his songwriting and recording has taken. The first is a newly discovered passion for painting which he feels has informed the way he approaches his writing and the second is that, back in 2017, he became a father for the first time and he feels that this has affected the way he now looks at subject matter. He can no longer sit back and be an independent observer; concerns for his child and the future they face now impacts on the songs he’s writing. You can certainly hear this increased introspection and questioning in songs like ‘Born Without a Clue’ – “Dumbed down and easy to please, I was painting pictures of who I thought I should be” and in title track ‘Ideal Man’ with its reflection on his past – “I hungered to be the hunter, killing with ease. No conscience to see the difference between beauty and beast”.

On first listening, this album seems a little disjointed and more than a bit schizophrenic; unsure of its identity. Repeated listening brings the realisation that this is a well-constructed collection of songs and, equally, shifting moods. Andrew Combs is a clever singer-songwriter who has created an album that questions his musical identity while firmly establishing his creativity and refusal to be easily categorised. Is this the new Cosmic American Music?