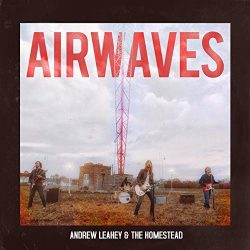 36 year old Andrew Leahey was born in Virginia and is now based in Nashville.  He currently fronts The Homestead and has been previously with Hobson’s Choice and The Opera House.  His current release is his second, entitled ‘Airwaves’.  Leahey suffered a concerning hiatus to his career in 2013 due to ill health and is apparently recovered and back to his music. He is known as a touring musician and has added his guitar prowess to others including Rodney Crowell, Elizabeth Cook and Drew Holcomb.

Leahey sees himself as being in the tradition of FM rock and the clue is very much in the title, with Tom Petty and Bruce Springsteen offered as the most obvious comparisons.  It’s not hard to see why and certainly if you like that top-down, air in your hair feeling then this might be the one for you – it is no doubt well sung and well played with plenty of guitar soloing.

Standout track, perhaps for its oddity value, is the Bunnymen’s ‘Lips like Sugar’ and this is a serviceable version that does not veer far from the original although that great guitar hook is very evident; full marks for spreading the net wide. ‘Workin Aint Workin’ is a witty closing number also worthy of a listen.  Otherwise nothing greatly differentiates one track from another and proceedings lope along at a comfortable mid-tempo – you might get to the point when a bit of variety would not go amiss.  If the comparisons are with Tom Petty then he was capable of considerable variety and that’s what moves him up to the next level.  I suspect that Leahey might be an excellent live draw so if a tour is in the offing then he may well be worth a look.