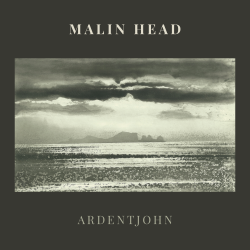 The album’s title is taken from the name of the most northerly tip of the island of Ireland, Donegal to be precise, the last headland before Greenland, where folks will tell you that more ocean liners and German U-boats have sunk off this coast than probably anywhere on the planet. It is a bleak but beautiful part of the world, and, coincidentally, featured in Star Wars: The Last Jedi. An interesting place after which to name your record.

Ardentjohn – Mark Abbott (lead guitar), Seth Marron (drums), Keiron Mason (vocals /guitar), Alan Shields (vocals/bass) and Linda Tym (vocals/cello) – originate from Edinburgh, although now hail from all over. This is reflected in some of the influences on the album, ranging from 10,000 Maniacs and Travis, with a hint of Coldplay on some of the slower racks and even a touch of Karl Wallinger/World Party. There is a good mix of guitars, piano, accordion and cello, and the harmonies throughout are of a good standard.

Opener ‘Magic Everywhere’ is a slow builder, the sense of magic provided by lots of echo/reverb on the voices and piano, followed by the title track, again with plenty of echo, driven effortlessly along by accordion. ‘I Wasn’t There’ is filled with cello, accordion and guitars and excellent harmonies and maintains the rhythm of the previous tracks.

‘Come Alive Again’ and ‘Longing to Fly’ slow the pace a little, the former track with perhaps a tad too much reverb, sounding like it was recorded in the studio bathroom. Then we’re back on pace with ‘To Be My Love’, with bonny accordion and less echo, which is a relief. ‘Orange Nights’ is one of the standout tracks, up-tempo guitar, very radio-friendly…..one can imagine this song being taken on by Natalie Merchant. “The sunshine man is here” unquestionably sums up the flavour of this song.

Two voices and simple guitar greet the brief ‘When The Faces Change’, building into more pleasant harmonies as the song progresses. ‘Daydreaming’, one of the longer tracks, feels a little confused, almost like it’s been chopped into sections, and we’re also deep into the echo chamber once again. Then another standout track, ‘When You Go’, which is beautifully constructed, with a stark, constrained piano, cello and guitars and almost a minute of gentle closing. Final track – and the longest – is an instrumental, ‘The Long Goodbye’, lots of synth work to open and close, but not much happening in the middle. Amusing to end the album this way, perhaps, but not the strongest track.

However, this is a very listenable album, with some decent songs, agreeable harmonies and fine musicianship. And the bonus of a link to Star Wars.