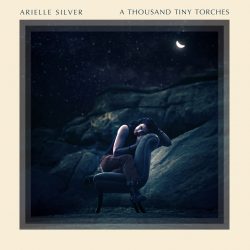 There is an eternally ongoing debate among Americana music fans whether this genre or any of its sub-genres should include any pop music elements. Essentially, that debate is practically useless. After all, isn’t the point of Americana music to be as encompassing as possible and include anything that sounds good? One of the albums that might spur the debate among those that give it a chance is Arielle Silver’s latest ‘A Thousand Torches’ and particularly its designated single, ‘What Really Matters.’

Yes, that track certainly veers into pop territory. But then, is it such a big deal? Pop or no pop, it sounds good. Silver shows that she is an assured singer and songwriter and that she has surrounded herself here with some stellar musicians. Then, there’s the rest of the album. And there should be no debate there about how Americana Silver’s music is. Mandolin-led ‘Headlights’ that follows the single, for example, should be a delight to any Americana-tuned ears.

Silver though is most assured at ballad-oriented material like ‘Only Forever’ or ‘Someone Else’s Dream.’ For somebody who went away from music for a decade or so, Arielle Silver sounds like she never went away, and ‘A Thousand Torches’ is a confirmation of that, even with the pop.

An album that proves Americana can be an all-encompassing genre