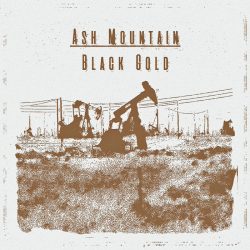 Manchester’s Ash Mountain have followed up last year’s three-track ‘Boom’ EP with a new four-track EP ‘Black Gold’. The band revolves around songwriters Tim Scott and Matt Jones and whereas ‘Boom’ showed initial promise, the new material is much more fully realised. The EP is a well-crafted slice of country-rock with all the expected ingredients: acoustic rhythms, pedal steel, laid-back vocals and nice harmonies. Where it differs from its predecessor is in its greater scope, variety and texture. It’s a more adventurous release and all the better for it.

Title track ‘Black Gold’ weaves interesting musical and vocal patterns that break out of the standard country-rock formula. Closing track ‘The Deal’ is a blues-based song of lost love and heartbreak that generates real warmth and emotion. ‘Enemy’ and ‘Walking Shoes’ the EP’s other two tracks are more straightforward country-tinged Americana but carry greater authority than hitherto previously demonstrated.

Ash Mountain have taken a confident step forward with this release. Anyone who accesses AUK regularly would probably enjoy it, if not necessarily be completely knocked out by it. However, there is enough here to suggest they may be ‘one to watch’.

Manchester's Ash Mountain climb a little higher towards the summit