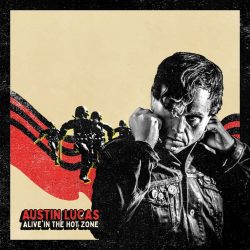 There is a post on Austin Lucas’s social media showing a sticker on a guitar stating “In November, just remember, Donald Trump killed John Prine” under which he states “My name is Austin, and I’m here to remind you of important things.” This album extends that reminder to deliver a mixture of diatribe and discourse which approaches manifesto. His social media tagline is “Songwriter, Singer, Anti-Fascist, Punk AF!”, which sums up this album pretty neatly.

Any American showing their politics in their music is almost begging to be excluded from the mainstream, which Lucas is more than aware of, and discusses in detail in a superb recent interview with AUK’s own Martin Johnson, where he acknowledges the damage to his “bottom-line” stating “the message is just way more important to me than selling a lot of records”
Lucas started off very punk, and still looks it, but as his career progresses, his sound has become more Americana, twang here, soul there. His father Bob was heavily involved in New Grass Revival, and that authenticity holds here within the rock. At the start of the pandemic, the much-travelled Lucas was in Mainz, Germany with his girlfriend, and rather than rushing home, ended up being holed up there. As his homeland became more political by the day, he knew he had to address every ‘ism going and get an album out before the election. ‘Alive in the Hot Zone’ is top-loaded with the best tracks, lead off ‘Already Dead’ is superb power(ful)-pop and extraordinarily literate. “For an Evolian fascist, Who doesn’t even know what the fuck that is”. AUK are a well-read bunch, but Google was needed for that, so hopefully we are not similarly tarred? ‘Drive’ is suitably propulsive and feisty. ‘The Truth’ is very Jason Isbell, ‘Cry Over’, fervent “what do you cry over if not these things”, ‘The Times’ drony and contemplative.

Not every song is consistently strong, but they all sound good, nicely balanced with great guitar moments. Enjoyable, thoughtful, and as it was actually made in Germany, zeitgeist squared.

All you fascists bound to lose