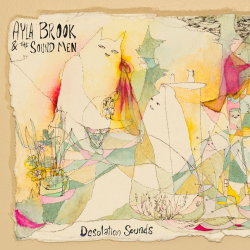 It was Captain George Vancouver himself who, whilst mapping the (now) British Columbia coastline, named the deepwater of Desolation Sound, claiming that “there is not a single prospect that is pleasing to the eye”. Of course we now look on the spectacular fjords, calm warm waters and forested mountains as an ecological paradise, with a seemingly perverse ironic name. The only community there is Refuge Cove, from where Ayla Brook conceived this collection of songs and stories about family and friends, and which names the penultimate track, an elegy to his father and their time there.

Brook hails from Saskatchewan, with its endless flat desolate plains, and is now settled in Edmonton, where his day job is a postie, in a city where winter temperatures remain below freezing point for months, often dipping below -20 Celsius in daytime, almost the perfect description of a desolate day. It’s a pleasant surprise then that the opening track of these ‘Desolation Sounds’ is anything but, ‘Lift Me Up‘ starting delicately, but building so that the inevitable shredding at its finish is life-affirming. Production throughout this album is full and clear, so it sounds great, especially Brook’s frequent guitar solos. Content doesn’t always match the ambition of the sound, there is no major push for originality, and for every good tale like ‘A Little More Light’ there are workaday stamp/claps or a dirge.

Brook has a strong country twang voice within a band style that references the likes of The Hold Steady, or The Heartbreakers, even ‘Nebraska’– era Springsteen. Other highlights are the pedal steel opening of ‘Love and Laughter’, and the duet ‘Floated So Far’ with Kimberly McGregor, with its knowing refrain of “this is the part where I repeat myself” . This album has drive, heart, love and loss strongly threaded, and quite evidently would be a treat onstage. Until such days return, these self-proclaimed “honest roots rockers” give us that and more.