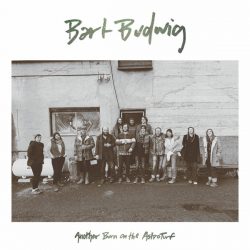 Like many Americana artists, Bart Budwig is 90% cigarettes and beard, but unlike many, this one is 10% Hawaiian shirt. Mysteriously self-identifying as a “son of Idaho”, Budwig’s appearance is visually striking before the band even plays a note. Luckily for us, his voice is similarly striking but stylistically grounded.

There is nothing flamboyant about the songs, even the cutely named ‘Sock Song‘ describes the trouble with meaningful relationships with a clever lyric “there’s always one that likes to get lost”. Budwig has seven albums available on Spotify dating back to 2010, and yet ‘Another Burn on the AstroTurf’ feels simultaneously well-seasoned but fresh, like a debut. He performs a slow, sonorous cover of Nick Drake’s ‘Northern Sky’, and it finds a happy home among his languid soulful songs. The album is rich in sound and content, with upright bass underpinning the snare drum and banjo. It is undeniable rootsy, but the electric guitar keeps it new and interesting. ‘Four Leaf Clover’ has Neil Young style grunge licks, ‘Rolling Stoned’ could be heard in a roadhouse bar, while ‘Strong Coffee’ sounds like the end-of-the-night blues croon, a testament to the diversity of craftmanship on the album.

Budwig and his personnel have successfully created an album of sensitive yet rocking songs. After listening to the album, Bart Budwig is a guy you can imagine going for a beer with.