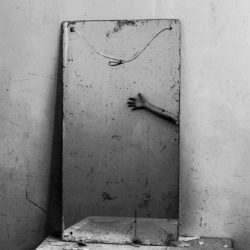 It comes as no surprise to discover that some of Canadian singer-songwriter Barzin’s music from his four previous albums has been used in films and on TV. The five tracks on this EP all have that rich, atmospheric depth that’s made to accompany reflective moments or big landscapes. That’s not to sell it short in any way, as together with his backing musicians he has created masterpieces of melancholy, exquisitely layered and performed until they become something to luxuriate in and enjoy. Barzin’s beautiful quiet vocals really come to the fore on these live recordings, aching with resignation and barely suppressed pain.

All four originals were first released on his 2013 album ‘To Live Alone In That Long Summer’ and the EP is completed by a cover of Jason Molina’s ‘Blue Factory Flame’, which becomes much more beautiful and, dare one say it, catchy, while retaining its essential pain and weariness. The four originals all mine similar ground: ‘Hard to Love Blindly’ suggests precisely the opposite of its title for example.

Is it worth getting them again? Absolutely it is. While the originals are good Barzin gets closer to the essence of the songs here and makes them uplifting in the way that only the best despair can be. The result is a set to delight and be inspired by.