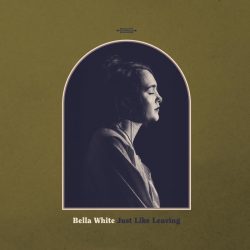 It’s always a pleasure to hear a young artist tackle a traditional musical style with confidence and ability and that’s exactly what you get on this debut album from singer and songwriter Bella White. Listening to this excellent recording, you’re instantly transported to the Appalachian mountains, hearing White’s keening voice drifting through on a backing of fiddles and mandolins – so it comes as a bit of a surprise to discover that she hales from Calgary, Canada; just around three thousand miles from the heart of the Appalachian region!

If you think Bella White’s name sounds familiar that will be because you’ve already seen it here on Americana-UK. Fellow writer, Jonathan Aird, previewed the lead single from this album, ‘Broke (When I Realised)’, back in September, before the album itself was released. As Jonathan observed at the time, “Bella White will surely be a rising star of bluegrass…” and the release of the full album serves to show just how right he was.

The album grabs you right from the opening strains of the first track, ‘Gutted’, a traditional sounding, bluegrass influenced song but with a very modern approach to the lyrics; “I was gutted, I felt soft/ So I took to drinking with the hopes of getting lost./For when you’re always losing it’s hard to see your wins,/then I start using and I’m numb again”. This is the refreshing approach White brings to her music, a traditional sound but with a young, modern approach to the storytelling. It’s a very winning combination.

The album loosely chronicles White’s personal coming of age experiences; early love affairs and breakups, moving out from the family home, starting to experience the world as an adult, realising that breakups can be a beginning rather than just an end. Her songs are open and honest and the simple, traditional style arrangements unfussy but glaring in their strength and subtlety. There’s so much to be enjoyed on this album. There’s also a decent variation in tempo that sometimes belies the sentiments being expressed. ‘Not to Blame’ has quite a jaunty style while dealing with what sounds like a quite brutal rejection, “I may as well have been a winding road/ You walked on me just the same./ Like a little girl with wide eyes and curls I didn’t know it was just a game”. The slight mismatch of tempo with mood is clever because it draws you into the song and makes you listen. For all the apparent simplicity of the songs and their arrangements, you quickly realise there’s a lot more going on in this album than you might realise at first listen. It really is an album that reveals more the more you delve into it.

It’s well worth drawing attention to the excellent band she has with her. These musicians are, apparently, frequent collaborators with White and that comes through in the precision of the playing and the understanding of the songs. The band features Reed Stutz on Mandolin, Julian Pinnelli on Fiddle and Alan Mackie on Bass, with Stutz and Pinnelli also providing some fine vocal harmonies. White herself contributes some nice guitar work to back her voice, which is quite an instrument in its own right. All this is extremely well pulled together by producer, Patrick M’Gonigle, himself a noted fiddle player, which may explain why he has such a good feel for this music.

As debut albums go, it’s hard to fault ‘Just Like Leaving’ as a first release. Maybe it would benefit from a little more variation in tempo and a bit more variety in song subjects, but both of those will come with time. Bella White is an artist with a big future ahead of her and you can only see her getting better in all respects – there’s a serious depth of talent here. Best tracks on the album? Well, it’s always subjective but I really like the title track, along with the track that Jonathan previously previewed ‘Broke (When I Realised)’ and album closer, ‘Now She Knows What it Feels Like’, with its bruised positivity and new resolve for the future; “but now her longing days are over you didn’t think she would see this through. /And now she can hardly remember what it feels like to love you”, along with its simple guitar accompaniment and great harmony vocals. But the other tracks are all good too!

There’s a growing appreciation of traditional bluegrass influenced music, especially among younger audiences, and I think Bella White may well be the right person, in the right place, at the right time – an exciting young artist whose talent should take her far.

A strong debut from an exciting new talent