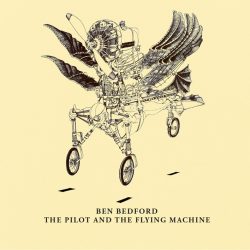 American singer-songwriter Ben Bedford’s fourth album is one of a plaintive, pure open sounding recording. The sound was obtained through utilising the acoustics of Douglas Avenue United Methodist Church in Springfield, Illinois. The Pilot And The Flying Machine was recorded over five days in January of this year, Bedford (acoustic guitar, vocals) and his touring partner of the past two years, Diederik van Wassenaer (violin, viola) and Ethan Jodziewicz (double bass) plus his wife, Kari Bedford who performs graceful harmony vocals. Jodziewicz studied under the legendary Edgar Meyer; and in turn is linked with him when engineer David Sinko (Punch Brothers, Meyer, Yo Yo Ma) does the honours in the department.

The musicians wrap the lyrics of Bedford’s solo writings (other than instrumental “Orrery” which is a co-write with the studio musicians) in an artistic, gentle caring fashion. Pure, a little wistful and mellow sounding Bedford’s music is a combination of plain storytelling as he speaks of travelling across Nebraska, Iowa and Illinois on “Letters From The Earth” and of how new frame house are built every year, and of “Scioto” calling him away.

Bedford’s affinity to the land and a heritage dates back to “The Voyage Of John And Emma”, a song about his great great great grandparents crossing the Atlantic from England to settle in the United States. The title-track is made up of Parts 1, 2, “The Pilot And The Flying Machine”, and though a little adventuress in doing so the beauty of the music and writing is not to be denied. Likewise is the feel obtained on “Prairyerth” and “Blood On Missouri” plus “The Fox” (could I detect hints of the late Steve Young)?

Most fetching and, darting even is “Letters From The Earth” as the vocals and music contains a greater urgency to underline there is lots more to come from Bedford. A man who well understands the four seasons, and migratory habits of both nature and change of human behaviour seems to be a bit of a historian too.

Bedford earns a half point for mention of “Rex’s Blues” in his lyrics of the above, and why not since Townes Van Zandt, and Patty Griffin are among his greatest singer-songwriter influences. Although he sounds like neither for he is his own man, completely.