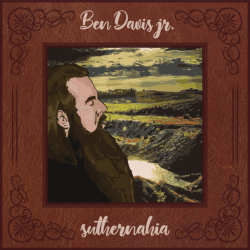 Ben Davis is a native of Ohio and lives close by the river of that name – which features prominently in the penultimate track of his new album ‘Suthernahia’ (Suthern-a-hiya). Davis is described as a veteran performer though as far as I can gather has only two releases namely, ‘The Day After Payday’ and ‘Leaving Cincinnati’ prior to this offering.  The current batch of songs are performed in conjunction with The Revelry his current touring band, though as names go, the previous incarnation, The Dirt Poor Troubadours, takes some beating.

His band members are Eddie Ashworth on Wurlitzer and mandolin, Ben Ervin on lead guitar, Levi Westfall on bass and Erik Miller on drums, so full marks for originality in terms of instrumentation. However, while the Wurlitzer is a nice touch its impact is lower key than might be expected.

The songs on this album are about relationships, good and bad, and whilst well-crafted tread familiar paths in relation to love spurned, unrequited or celebrated. Characters are cast as worthy and unworthy with little in between. None of this is to say that it is not an entertaining album; just that there is little that lifts it to the ultimate lyrical heights.

It all kicks off with ‘I Think You Should’ – a tale of someone on the ‘suicide plane’, and encouraged to get a grip of all those things neglected in their life.  ‘No one cares if they hear from you again’. If, like me, you appreciate the sub-genre of notable ‘count-ins’ (the ‘1,2,3,4’ in the middle of the Allman’s ‘Mountain Jam’ being a fine example of its type) then you will appreciate the robust ‘2, 3’, that heralds a fine guitar work out. This is a song with harsh words and just as harsh a message.

Even without the advantage of a lyric sheet or cover art, it’s clear that Davis is possessed of a voice that certainly matches the genre, sings clearly and the lyrics are easy to hear and understand. If the subject of the first track is unloved then the focus of the second, ‘Can’t Get Enough’ is the opposite and Davis sings of his true love for a woman whose husband is clearly not a nice guy.

‘If You Ever Will’ bring a lighter touch and acoustic guitar which is a side of this artist that you might prefer. The standout track is ‘Carly’ – the final cut – a stark tale about childhood love and death as sweetheart Carlene chooses the needle and eventually succumbs. Davis fares no better as he drowns in the bottle – hoping to meet his love in the great beyond.  This is a stark song with minimal accompaniment and a touching lyric. We even get a glimpse of what it apparently takes to be a man as Carly’s father tells our hero that if he takes any liberties then he ‘Ain’t afraid to take your young life’ – showing him his gun just to emphasise the point.

In between, ‘Porchlight’ recounts the tale of a reformed alcoholic about to relapse because his love is with another.  By way of encouragement he threatens that, ‘If you don’t come back to me by tomorrow darling I’ll be dead’, though he admits, ‘What I’m doing might be wrong’.  Indeed!

Further takes on the nature of relationships include, ‘Just Let Me In’, which plods a little and could do with some editing. It has a nice fade with pedal steel and a military drum beat but perhaps illustrates that the shorter punchier songs are more effective. ‘Sunday Morning’is just such a cut, a brief tale of loneliness with a nice sax break.  ‘Rambling Bones’, recounts the archetypal untrustworthy drifter,  ‘I’m Doing Fine’, has a neat hook and promises that it won’t be long before the singer is home.

Comparisons are made with the Grateful Dead among others but on ‘Sunday Morning’,  I heard Ronnie Wood playing one of those choppy riffs before Rod, when he was able to do so, makes an entrance in the spirit of ‘Old Raincoat’ or ‘Gasoline Alley’.  Whatever he may have become there is nothing shabby about that part of his career.

‘Carly’ shows what Davis is capable of and is engaging from start to finish with a heartfelt lyric. Elsewhere, there are good guitar driven songs, of love and loss, well played and sung and if that is your preference you will certainly enjoy this album.

About Gordon Sharpe 60 Articles
Retired music fan longing to get back to the Lakes and hoping to visit Scotland before much longer - somehow South Cheshire just doesn't cut it. Still seeking the grail in terms of a convincing description of what Americana really is but really enjoying the search. And still wondering when Kenny Rogers will get his just deserts