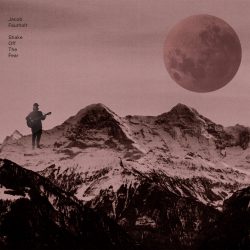 One of Denmark’s most prolific songwriters, Jacob Faurholt is well known in Alt-Folk circles in his home country and while this is his 8th solo release it is the first to be recorded in a proper studio. His voice could politely be described as something of an acquired taste – think fingernails and blackboard. One thing the album could have done with was someone to help him find more suitable keys in which to sing. His voice often sounds to be straining for the note, leaving something of a harsh grating tone.

On opener ‘Stargazing‘ his voice simply runs out of road and ends up in a croak. The most successful songs are the more electric power-poppy ‘Super Sorry‘ and ‘The Dark Isn’t Right‘ which sounds so much like Mazzy Star that you half expect Hope Sandoval to come in with the words rather than Faurholt.

The duet with Nadia Sharpe Faurholt on ‘Hide From The Dark‘ takes the rough edge off Faurholt’s voice and more collaborations would be a good plan as they blend well together. He seems to be aiming at times for the primitive charm of early Jonathan Richman; at others his falsetto comes across as more Jeff Buckley.

AUK reviewed his last EP as recently as April and the home studio lo-fi flavour of ‘Sad People‘ seems to suit Faurholt far better than the production on this album. He claims Conor Oberst as an influence, and while this is recognisable, he has a long way to go to achieve the warmth of Oberst’s best work. Others may find his voice less problematic, in which case they will find some pleasant songs on ‘Shake Off the Fear‘, along with some charmingly whimsical takes on English lyrics.