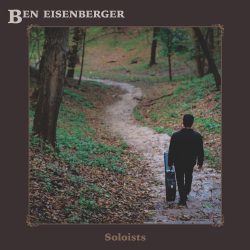 There are some albums which are perfect summer soundtracks when driving to the coast and others are made for cold winter nights when you’re all wrapped up and want to stay home. Well Ben Eisenberger’s second album ‘Soloists’ is the perfect autumn album. From the cover where Eisenberger is walking alone in a grey, autumnal wood to the nine songs on the record, it just has that autumn feel to it – or as this is an Americana website – the perfect fall album. Omaha native Eisenberger has an interesting voice moving from a high Paul Simon feel on the likes of ‘The Brightest Star In The Night’ to a lower register on ‘Wide Open Spaces’ which gives the tracks some light and shade.

On the whole the backing is very gentle and ethereal with some delightful, floaty pedal steel on ‘Don’t Change Your Mind’ and ‘See You On The Other Side’ along with some folky flute on the instrumental ‘This Is It’ and some delightful filmic strings on the aforementioned ‘Brightest Star In The Night’ and ‘Wide Open Spaces’. The guitar playing throughout – mainly on acoustic – is superb which isn’t surprising as Eisenberger is classically trained.

On the whole the songs are fairly light and gentle and sound if they might float away in the autumnal breeze on gossamer wings. The exception to this is the album’s odd closer ‘Johnny’ with its Appalachian like fiddle, Eisenberger’s old-time country vocals softened by some female harmony with lyrics featuring sodomy, depravity, muscle memory and debauchery – all very odd and somewhat out of keeping with the rest of the album.

One of the features on a few tracks are the off-beat outros on some of the tracks featuring jazzy guitar, folky banjo and contemporary classical flute – it would have been nice to hear those outros on some more of the other tracks as it would have given the album a unique flavour.

Eisenberger is obviously a talented singer, instrumentalist and songwriter. He also plays in an indie rock band, a free improv ensemble and a punk outfit so maybe ‘Soloists’ is his way of highlighting his gentler side. It’s a very nice album – it just needed a bit more of the edge of his other musical outlets to make it something special.