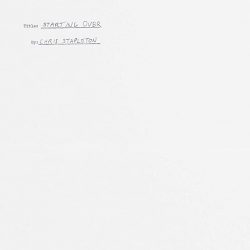 The multi-award winning recording artist Chris Stapleton has already made himself the number one man in country music, and with his new record ‘Starting Over’, he not only solidifies this position once again, but also shows off some new styles that we haven’t seen before which are possibly a step into something new. The LP was recorded at Stapleton’s favourite recording studio, the historic RCA Studio A in Nashville, where he again teamed up with producer Dave Cobb. At 14 songs, it’s the same length as his debut album ‘Traveller’, but offers a wider variety of songs than five years ago. The first song and title track of the album ‘Starting Over’, feels like Stapleton’s attempt at writing a song that is in the same vein as his cover of ‘Millionaire’ from his previous record ‘From a Room: Volume 2’. Whilst it has the same great feel, the lyrics just seem quite cheesy compared to what we’ve come to know from Stapleton. But that’s not to say that it is a bad song and it actually really sets the vibe for the laid back parts of the album.

It’s not long before Stapleton returns to the gritty sound and his trusty electric guitar in the tracks ‘Devil Always Made Me Think Twice’ and ‘Arkansas’. The former has something that is present across the slower songs of the album, brilliantly melodic guitar, and even though it is one of the faster and upbeat songs, it has that sound that you crave when you listen to Stapleton, the raspy nature of his voice as he pushes the limits of his vocal range.

But it’s what’s different about this album that makes it such a special listen. The second single, ‘Cold’, is something that you are more likely to hear Adele or Michael Buble sing than Stapleton himself usually. An orchestral arrangement and the only piano-focused song really gives you a glimpse into what he would have been like if he had ventured into the world of powerful ballads instead of hard-hitting country music.

Of the 14 songs on the LP, three are covers, two of which are by Guy Clark, ‘Worry B Gone’ and ‘Old Friends’, whilst the other is John Fogerty’s ‘Joy of My Life’. It’s the Fogerty cover that really stands out, taking a beautiful song and somehow making the lyrics just work even better with Stapleton’s soothing voice. It’s a love song and one that you can picture Stapleton singing it to his wife Morgane, who yet again features with her beautiful harmonies across the album.

‘You Should Probably Leave’ is the song that best illustrates what is so good about this album. Melodic guitar is at the fore in this song about a guy and girl who know that temptation will take control of them if they stay together for too long. But interestingly it doesn’t feel like a Chris Stapleton song, but much more like a John Mayer track with this bluesy guitar feel. But with Stapleton and Morgane’s voices over the top, a truly special track is created.

Overall, this feels like a great step into something slightly new for Stapleton, an album that never really falters but just continues to open up more and more new things that he has to offer, be it powerful and gritty rock songs, power ballads or even slow and melodic love songs. Looking at those three genres, it could be argued that this isn’t new for Stapleton at all, but there’s just something magical and different about this whole record that could make it one of the best of the year.