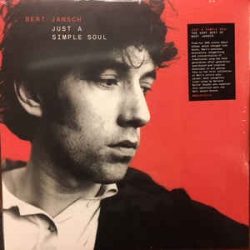 Try for a moment to count the number of guitar legends who came to prominence in the 1960s and you may be enlisting friends to provide the extra fingers and thumbs needed to keep tally. To have your name lauded by some of those very legends is extraordinary. Jimmy Page admitted to being obsessed with Jansch and Neil Young claimed he did for the acoustic guitar what Hendrix did for the electric.

Jansch’s career had, as so many do, its ups and downs. Proflic at times – between 1965 and 1972 he released 13 albums, six of which were solo. He was a more shadowy figure in the 70s – different times, different musical fads, and it wasn’t until another generation of Jansch-obsessed musicians revived his name that his profile again began to build. And so it is that this first career spanning collection comes to be compiled by Bernard Butler (once of Suede) and another of those in the thrall of Jansch’s playing.

This selection is presented chronologically, beginning with three tracks culled from his 1965 debut. We can assume that those who will use this collection to kick back and remember where they were in the 60s when they first heard ‘Strolling Down the Highway’ (from the first album and the first track here) may be few in number. The rest of us can only imagine the impact hearing these tunes then may have had. That the first album was recorded on one tape machine in the sound engineer’s house, but has had such an impact, is extraordinary. So versed are we now to the playing of Page, Young, Butler and Marr – and to an extent Nick Drake whose playing resonates with echoes of Jansch – that listening to this anthology is like a ‘return to original sources’. This must be like (if you can/could) reading Zola in original French or Tolstoy in Russian. It would be bizarre not to think a folk record from 53 years ago would not sound different now. But, this is no compilation to satisfy mere curiosity; it’s a pleasure and an education. It’s time to acknowledge extraordinary talent, to delight in the way the playing shifts from silky accompaniment to plaintive vocals to expressive, sharp visceral plucking. The range of emotion from the playing is something to admire, and it is emotion rather than technique that stands out.

The first part of this compilation covers the period up to 1974 and includes ‘Needle of Death,’ often noted as his most famous tune, and ends with ‘The First Time Ever I saw Your Face’ written by Ewan MacColl for Peggy Seeger and performed here with Mary Hopkin. The second part takes us right up to Jansch’s last album ‘The Black Swan.’

As an anthology that highlights the legacy and influence of a unique talent it cannot be faulted. The downsides are inevitably space – how can we really get a feel for a lifetime’s work when one collection attempts to draw from 23 albums? That means this selection is probably best for the newcomer to get a feel for Jansch – for it to open the door to perhaps more exploration. One curiosity: ‘Just A Simple Soul’ comes as a double CD with 39 tracks or a double vinyl offer which is 12 tracks less than the CD. Maybe this is down to cost, but given the upturn in interest in vinyl and the very nature of how Jansch’s recordings tapped so much into a folk feel, surely the music connoisseur would like the extra two sides and 12 songs? Pre-ordering vinyl did come with a tote bag though!

Career spanning compilation of Jansch’s career - ideal for the newcomer