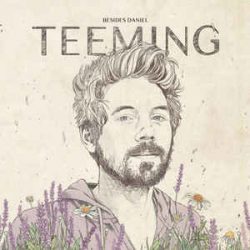 “There is no more sombre enemy of good art than the pram in the hall.” The English literary critic Cyril Connolly said that. It’s unclear if the only child of Major Matthew William Kemble Connolly ever lived in a tiny house in the mountains of North Georgia, but it’s obvious that Connolly was talking rubbish. Becoming a parent and putting down roots need not be the enemies of anything – and creativity knows no bounds. That said, there’s a gentleness to the fourth album from Besides Daniel that could only come of writing songs softly in the still of another new night.

T E E M I N G, then, is a record of privately picked acoustic guitars and precision percussion. Sure, there are other colours from a few instruments, but this is a record dominated by one man and his guitars. There’s bits of Bon Iver in the double-tracked vocal of ‘Apologize’, and moments of The Milk Carton Kids in the heavenly harmonies of ‘Live Alone’; however this is a singular record styling itself on the best bits of its forerunners.

‘If You Ask Me To’ has a lovely lilt and stand-out track ‘French Braid’ shuffles along in the type of perpetual motion that only great songs can gather, but there’s a reliance on tried and tested chord sequences and double-tracked vocals that sometimes threaten to derail this wagon’s wheel.

The story selling Besides Daniel’s latest record is he’s now settled down, gotten married, had a baby and built a house. The music reflects that… perhaps a little too much. There’s a lack of grit beneath the nails of these songs and it’s hard to fathom why… perhaps the saccharine strum of ‘Roommates’ (“I’m not pining for the past”) is one too many declarations of contentment for T E E M I N G to contend at the very top table.

New dad sings after supper to make sense of it all