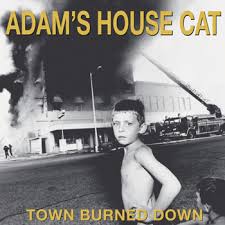 ‘Any ful kno’ that the Drive by Truckers were founded in 1996 by Patterson Hood and Mike Cooley but 9 years before that came Adam’s House Cat, founded in a dank basement in Florence, Alabama. The band toured hard for 3 years playing original tunes in a region where covers bands ruled the bars. This album was recorded at Muscle Shoals studios in 1990/1 but was lost in the wake of the band’s demise, tornados and the studio being sold. Missing for over 20 years the tapes reappeared last year and with the addition of new vocals from Patterson Hood singing on every track ‘Town Burned Down’ was ready for release. And what a release! This is vital stuff. Hard to fathom the seeming indifference that led to their demise.

‘Lookout Mountain’ is as sharp and hornery as the DBT version. ‘Buttholeville’ is spikey and fast, angry and annoyed. ‘Child Abuse’ is all new wave chopped guitar with singalong chorus. There is lots of Cooley’s guitar figures flying around and they sound as tight as any frontline Southern rock band. ‘Love Really Sucks’ has hints of Husker Du as much as anything else, whilst ‘Shot Rang Out’ sees the beginning of Hood’s individual narrative style that he has honed with the Truckers. Finishing with ‘Cemeteries’ – all bright guitars and Hood’s inspired lyricism, this would fit into his recent canon perfectly.

This album is not just for Truckers completists. This is a cracking slice of history served up with an immediacy that makes it sound and feel as relevant as anything else being produced today. Brilliant.