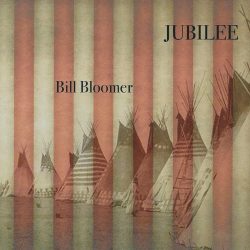 This might be one of those “marmite” albums – one to polarise opinion. Bill Bloomer hails from Illinois, though it would seem he spends much of his time globe-trotting and playing in various bars and small venues, a troubadour for the modern world. This album, ‘Jubilee’, is his first recording of his own songs and it’s an odd confection. According to his biog, Bill Bloomer was a Rodeo Champion who’s career was cut short by injury. Encouraged by family friend Steve Goodman (the man who wrote the excellent ‘City of New Orleans’) Bill picked up his guitar and started travelling.

His songs are interesting and shot through with references to his travels, the people he’s met and the things he’s seen along the way. The problem with the songs is that they clearly have strong narratives but the lyrics are hard to hear and that makes these songs, which are essentially in the folk blues tradition, quite difficult to assess. Bloomer is possessed of a cracked, in your boots bass voice that, at its best, is very reminiscent of Tom Waits. Listening to this recording you get the feeling that he’s aware of the comparison and, to an extent, plays on it. But while his voice is full of character it lacks the musicality and clarity of Waits. When you can discern the lyrics they come across as a little desperate to sound hip; “The Red Man told Columbus, Hey Man, let’s do lunch” from ‘Columbus’ or “You went down to Manilla and you found a guru named Godzilla. You let that jackass come between us in the sack just to feel a penis” from ‘Go Find Yourself’.

Listening to Bloomer on this record you get the feeling that he’s one of those characters that comes over so much better in a live situation and would’ve been better served by a live recording, where you can hear the interplay with the audience. This is born out by talking to people who have seen him live and say how entertaining his live sets are and how his wit and sense of fun are a big part of his act.

On a studio recording like this everything goes under a microscope and something like a sixties style organ accompaniment that probably comes across as ironic in situ just sounds cheesy on a studio recording. He also has quite a laconic style of delivering his songs and this can lead to a certain amount of tempo variation within a song – again, this can work well in a live situation but is not so positive in the studio.

He’s well served by the various musicians he’s put together for the recording and on the tracks that do work well, like the Dylan-esque ‘Goin Electric’, you get some sense of what Bloomer is trying to achieve – there’s a good Tex Mex sound here and some clever stop/start guitar but you’re still left with the feeling that it would work better if you could see the musicians and feed off the band energy.

Bill Bloomer has clearly created a successful career for himself, touring around the world and working with some very big names, many of whom have provided some glowing quotes for his publicity in support of this album, but this format really doesn’t show him off in the best possible way. Bloomer’s next album needs to be one recorded with a live audience.

Modern troubadour not best served by the studio format.