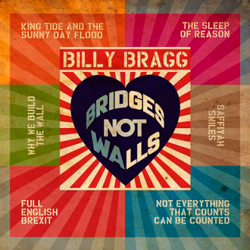 2017 was a tumultuous year, Brexit and Trump providing an endless spectacle of rancour and discord, right wingers on the march, reason stifled by media barons (aside from those accused of printing “fake news”).  Billy Bragg, a voice of conscience since day one, pondered, “What’s a singer -songwriter to do when events keep challenging the way we see the world?” His answer was to write these six songs, released as recorded over the year and now handily gathered together.

Bragg admits that with other projects on the go he was reacting to events as they happened, a song, once written, was recorded and released but this disc, a mini album or EP as you like, is a cohesive project and a reminder that protest can be delivered via song.  Here Bragg rails against those who would deny us the progress slowly achieved over the years in a variety of styles. There’s the tub thumping return to Bragg’s angry young man guitar thrash on The Sleep Of Reason, a song that pillories Trump and his support of the far right.  His cover of Anais Mitchell’s Why Do We Build The Wall speaks to the Orwellian predicted small mindedness and contradictions of insular nationalists and it’s another angry scrubbed guitar polemic.

While the two songs mentioned above remind one of Bragg’s early years when he and his guitar would turn up for a Rock Against Racism gig, plug in and let loose, the others reflect his maturation as a musician. King Tide and The Sunny Day Flood is a countrified reflection on the perils of global warming while Saffiiyah Smiles (inspired by video of a brave protester at a far right rally) hits a soulful groove as Bragg delivers a killer punch with the opening lyrics, “Angry white men dressed like Elmer Fudd, shouting something about soil and blood/the woman of colour steps out from the crowd and does something to make us all proud.”

Brexit is the target of two songs. Not Everything That Counts Can Be Counted is a rueful account of the lies and sound bites fed to the public during the referendum campaign and with its sweet melody and rippling mandolin stands up with Bragg’s work with Wilco when they were revitalising Woody Guthrie. Finally, Bragg inhabits the soul of a Brexiter on Full English Brexit, a gracious song which tries to understand the thoughts of an Alf Garnett like character, befuddled by his history and feeling besieged, clinging to Empire and the war years. It’s a magnificent song which refuses to simply point a finger, acknowledging his concerns while laying bare their faulty reasoning.

A concentrated dose of reality to be taken three times a day.