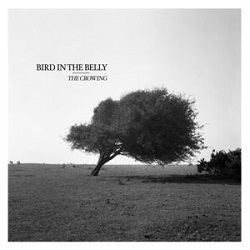 Folk music, the gathering threads of tradition, is forever being renewed – it needs reshaping as much as reverence if it’s to be inculcated into new generations of singers and musicians. And at any one time there are two or three strong exponents of the music that set the new normal for how folk is meant to sound. Bird in the Belly came together at Cecil Sharp House through a celebration of Young Folk organised by Sam Lee’s Nest Collective. And thank goodness they did because this combination of avant-garde singer Jinwoo, traditional duo Hickory Signals (Laura Ward and Adam Ronchetti), multi-instrumentalist Tom Pryor and musician Epha Roe is one of those magical combinations that might never have happened without a nudge here and there. Bird in the Belly take old songs and reshape them – at times sounding ultra-traditional, at times modern and experimental.

Jinwoo has a raw, cracked vocal forever sounding as if it’s trying to escape from him, but in combination with Laura Ward’s incredibly strong timbre and unadorned delivery it makes for an unexpectedly perfect vocal blend – the songs come to life under their combined vocal touches. Not that the rest of the band are just bystanders – there’s a breadth of instrumentation, elegiac fiddle, strong rhythm acoustic guitar, flutes and more. In it’s breadth the music on ‘The Crowing’ is reminiscent of the late sixties folk band explosion. Opener ‘Give me back my Heart again’ is a perfect exemplar of what Bid in the Belly are about – starting with just Laura Ward’s voice, then after a verse Jinwoo blends in. And having been once through the song the tempo increases, the band kick-in and we’ve shifted from an beautifully melancholic unaccompanied ballad to something more akin to a medieval dance tune. Exquisite. And talking of exquisite, Bird in the Belly’s take on ‘The Duke of Grafton’ builds so slowly piece by piece seemingly to describe the fate of those who dare to be a Queen’s lover. Sombre, dark, and glorying in the graphic depictions of funereal reverence “they took him to London so near to the crown / they pulled out his bowels and stretched forth his feet / they embalmed his lovely body with spices so sweet”. His funeral is treated with great pomp and circumstance – but somebody had him drowned.

‘Horace in Brighton’ is a new song drawing on the nineteenth century poetry of Horace Smith to depict Brighton – both the one Smith visited and also the one the band live in. It’s the unexpected lightness on an album which is by no means overly grim or earnest but is, in the best sense of the word, serious. Which can lead to a song like ‘Verses on Daniel Good’ which is a Victorian murder ballad, made surprisingly catchy and jaunty as the terrible betrayal and murder is picked over with prurient glee. It’s this free and easy approach to the music, coupled with undoubted musical skill, that makes ‘The Crowing’ an album worth hearing, and Bird in the Belly a band worth taking note of : catch them in tiny folk clubs whilst you can.

Bird in the Belly come to shake up folk music – and succeed.