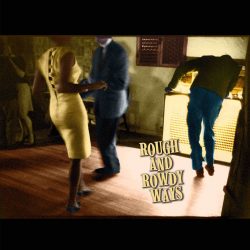 “Well you took your own sweet time with this” we can hear our regular readers shout given that this record has been released for a good week or so now and the world and her husband have been picking over the bones of the thing (also the heart, soul, kidneys and temporal lobe). Indeed lovers of the Euterpian muse have been positively beside themselves in their excitement and, indeed, willingness to chip in with an opinion or three regarding this new release coming, as it does, some eight years after the last issue of ‘fresh’ material. But, y’know, we’re all about the music here at AUK and care not a fig for other people’s opinions/reputations/pre-eminence. So we think that we should look at the album in terms of how good (or not) the music is on its own terms. Look – Bob Dylan is “Bob Dylan” and no one is going to dispute that. Better folk than us have had much to say about his contribution to the canon of popular music. But, similarly to the man himself, we are fiercely independent and will simply let our words speak for themselves.

OK – get on with it. Well, in the first instance, we have had something of a say already (here, here and here). There’s nothing like a good teaser to get people hooked and we’ve covered all three of them. Our assessments stand. However, to progress, we should perhaps look at the album in the round (a full twelve inches round to those of us trapped in a particular time warp, which is kind of appropriate). Let’s address that big grey thing with a trunk in the room. What is the voice like? It’s ‘appropriate’ is the only answer. There is a ‘feeling’ to this record. A sort of gloomy present/future, not exactly doom-laden, but a very dark shade of grey. Is it Johnny Cash in the ‘latter stages’? Close. Is it listenable? Yeah. Does it fit? Of course – the timbre/range/scale has always been closely aligned to the songs in Dylan’s output. If you can strum a guitar, blow a harp and recite your words in some kind of accord then you are good to go. Virtuosity isn’t in question and it has always been thus. The guy is a poet not an opera singer. In that sense it doesn’t really matter. Your writer here has had a problem or two in the past transitioning from 60s/70s/80s Dylan to 90s/20s Dylan but now it doesn’t really matter. He is seventy-nine and you kind of have to roll with that punch. He’s always been capable of using a different voice – we probably need not mention ‘Nashville Skyline’ but do so out of sheer bloody-mindedness. He might approve of that we think.

In terms of musicianship there is little to say. Everybody does their job. Again, this isn’t a ‘thing’ that requires a huge amount of analysis. Its largely acoustic – guitars, piano, drums, bass, strings and so forth but not universally so. We go back and forth between the very bluesy and the very folksy. The bluesy stuff is ‘electric’ and the folksy stuff ‘acoustic’. That’s how it goes, we guess. If you think that you are going to get up and dance then forget it. Unless of course a Zimmer-frame is your preferred partner.

And so the ‘meat’ of our discussion here is the what’s left: the lyrics. The words. What Dylan is actually saying. Sadly I need to be brief in this respect because there are some guys outside in white coats who are figuring to take me away. And I’m OK with that. I’m still trying to get to terms with “Stuck Inside Of Mobile With The Memphis Blues Again” so I’m way behind the curve. And I thought I was doing well to get that far. I’m going to abdicate my responsibility here and say this – just listen. ‘Murder Most Foul’ will keep people in business regarding their Bachelor’s degree dissertations for years on its own. ‘Black Rider’ will garner a certain kind of notoriety for saying “Black rider, black rider hold it right there/the size of your cock won’t get you nowhere” (and the ‘hack off your arm’ reference will excite fans of ‘The Heart of Darkness’). ‘Mother of Muses’, playing as I write this, elicited the response from my wife “What is this dirge?” without her having to hear what he is saying.

So forwarding on – what’s the feeling? Check your opinions in at the door and ask yourself is this a record that you should go out and buy? Well yes, maybe. There is a ‘vibe’ to this. Given our current circumstances this is where we are at. Nobody wants the misery of being stuck at home with no possibility of seeing our loved ones. Nobody needs the purgatory of being without outside influence. Not to prematurely outdate this article but Dylan has absolutely hit the zeitgeist here. It’s a miserable world out there and, whilst we look forward to a ‘new normal’, I’m sure that we can relate to the place where we are – it’s blue, it’s philosophical, it’s a place where we can look to confirm our dreads and fears. He absolutely nails our past and present (and future) worries. But – as ever with Dylan – there is a sort of Easter egg hidden within. There is a redemptive moment tucked away on track four. Not at the beginning or the end but somewhere in the (sort of) middle. Typical. ‘I’ve Made My Mind Up To Give Myself To You’ speaks to us all of our yearning for love. Our desire to give our love, if you will. Our desire to just, y’know, rise above it all and (bizarrely) hunker down and express our private feelings for one another. I thought that I had given up with Zimmer(frame)man years ago. Turns out I now have to re-evaluate that. He still has much to say.

I am a professional curmudgeon. I don't care and neither should you. Buy me gin and we can possibly be friends. View all posts by Paul Villers