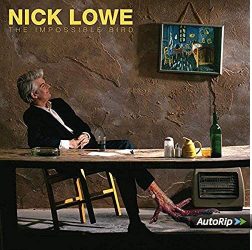 Nick Lowe has reached the exalted position of a national treasure, with appearances on Breakfast TV and various TV chat shows and coverage in the national press. This was definitely not the case in 1993, when, after a period of falling sales, he found himself without a major record deal, his latest push for mainstream success, the group Little Village with Ry Cooder, John Hiatt and Jim Keltner, had not delivered artistically or commercially and, while he had a legendary reputation with fellow musicians, particularly in America, he was struggling to re-start his career. Fate then took a hand when Curtis Stigers was asked to record a cover of Nick’s ‘What’s So Funny ’bout Peace, Love And Understanding’ for ‘The Bodyguard’ film soundtrack. While the song didn’t appear in the actual film, it was included on the soundtrack album which sold 45 million copies giving Nick a seven-figure payday.

This gave Nick the breathing space he needed to record the album he had had in his head for somtime and he methodically went about building a team of musicians to record his new sounds. Additionally, he decided to develop and record the songs in and around his home area of Brentwood, West London, rather than in a major studio. Building a band of musicians who would help him deliver his vision was key and, while he is more than capable of producing himself ,Nick decided to use a co-producer to bring additional objectivity. Friend and great British drummer Bobby Irwin was the catalyst for the musicians bringing in Geraint Watkins, keyboards, and producer Neil Brockbank. Bobby had been a member of Nick’s ‘80s band before moving to San Antonio, Texas, for a while where he further developed his drumming skills while playing in the local country music scene. He continued to work with Nick as drummer and sometimes co-writer until his death in 2015 from cancer. He was also Van Morrisons drummer of choice from the late ‘90s. Nick said of him “He was a songwriter’s drummer, he played the song”. Additional musicians included Bill Kirchen, Gary Grainger, and Paul Riley, bass. While Nick’s sound on the album was still a mix of country, soul, pop and rockabilly, this time he put the song and the vocal performance out front. Will Birch in his recent biography of Nick, ‘Cruel To Be Kind: The Life And Music Of Nick Lowe’, recounts how Nick the producer would discuss Nick the vocalist in the third person.

The resulting album, ‘The Impossible Bird’, not only saved and reinvigorated Nick’s career, it is also that rare thing, a perfect record with no filler tracks and with at least four classic Nick Lowe compositions and three covers that Nick makes his own. The backing tracks are in the sweet spot of not requiring any further simplification or additions to enhance the overall performance. ‘Soulful Wind’ kick starts the album with a rockabilly beat,great melody and compressed guitars and while Nick’s vocals are clearly country there is no pretence he is from Brentwood rather than Nashville. The next track is a true classic, ‘The Beast In Me, where Nick sings about keeping his demons in check. It took over ten years to evolve and was first heard on Johnny Cash’s ‘American Recordings’. Nick’s version was alsofeatured in the first episode of the Sopranos. The Dallas Frazer song ‘True Love Travels On A Gravel Road’, also covered by Elvis Presley and Percy Sledge, gets the Nick Lowe country soul treatment and is taken at a slow waltz tempo. Nick has said that he thinks this song is one of the most perfect amalgams of country and soul music and his version certainly delivers. Another cover follows, Roger Cook and Allen Reynolds’ ‘Trail Of Tears’ that Nick takes at a lolloping pace. There is a tradition in popular music of using a girl’s name as a song title and Nick adds his own ‘Shelley My Love’ to this tradition. This is a very simple song and all the better for that being a highlight of the album. The song was brought to the attention of a wider public when Rod Stewart covered it in 1998 at Elvis Costello’s suggestion. ‘Where’s My Everything’ shows that Nick hasn’t lost the humour that characterised his earlier work. Evidently Nick had a habit of asking his team where certain items where and this song takes that habit to its logical conclusion.

The second side of the vinyl version of ‘The Impossible Bird’ opens with ‘12 Step Program (To Quit You Baby)’ . It has jaunty rockabilly beat and the sly humorous lyrics are prime Nick Lowe of old. The old Nick Lowe is also well represented by ‘I Live On A Battlefield’, a Motown sounding co-write with Paul Carrack that was also covered by Diana Ross and his cover of Ray Price’s 1953 homage to the then recently departed Hank Williams ‘I’ll Be There’. The remaining four songs ‘ Lover Don’t Go’, ‘Drive Thru Man’. ‘Withered On The Vine’ and ’14 Days’ are clear evidence of a new Nick Lowe that no one had suspected was there. Bill Kirchen has said “It was like recording inside a huge, old Martin guitar. Making that record made me realise what a really thoughtful pop theoretician Nick is. I asked him to send me the demos so I could work up some snazzy guitar parts, but he declined”. Neil Brockbank has said the session made him realise Nick had become “a world class vocalist and studio brain”. Nick himself has said of his new ballad style “It was so thrilling to play so slowly and keep a groove going”.

‘The Impossible Bird’ chimed with the emerging americana movement and he toured America for the first time in five years. In fact Nick used part of his ‘Bodyguard’ money to tour the album in Japan, various capital citiesincluding London as well as America. He named his backing musicians The Impossible Birds and they included Bill Kirchen, Bobby Irwin, Geraint Watkins and Paul Riley. Also, ‘The Impossible Bird’ was issued on independent labels Demon Records in UK and Upstart, distributed by Rounder Records, in America which secured Nick a significantly better royalty rate. Working with independents has allowed Nick to follow his muse without the pressures, and at times interference, that majors can bring.

The approach that Nick designed and developed for ‘The Impossible Bird’ formed the basis of his approach to recording for the next twenty years, only coming to an end with the sad deaths of Bobby Irwin in 2015 and Neil Brockbank in 2017. It prevented him falling into the trap of having to maintain his younger persona into middle age and it allowed him to develop his love of pre Beatles pop into his more mature songwriting. The deaths of such close friends and musicians, who were integral to his sound, was such that Nick seriously considered retiring from music. However, he developed a relationship with guitar band Los Straitjackets, and as well as a number of tours, he has released 3 EPs which hopefully mark the start of the  latest phase of his career. Anyone who was lucky enough to catch him on his 2019 UK tour will know what a simpatico relationship exists between Nick and the band, so here’s hoping for a long and productive relationship.