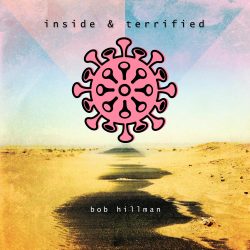 It is still novel to see songwriting directly addressing our experiences surrounding the Covid-19 pandemic and its relationship with the rapidly changing natural environment. ‘Inside and Terrified’ was home-recorded over a six month period during lockdown in a process whereby the band never got to play in the same room. It has deliberately been released while that memory is fresh.

Bob Hillman released three albums in the late nineties and early noughties before having a hiatus with “real jobs” then staging a comeback in 2016. The songs on his latest release were all inspired by lockdown, but the individual songs address the subject from a variety of different approaches. The primary concern with the subject matter is that such discussion is potentially politically sensitive.

To proffer opinion on the musicianship is safer territory. The composition is capable with the addition of clarinet being relatively unusual but effective, particularly in combination with the nylon string guitar and quality vocal harmonies. Overall an easy-listening sound predominates with a smooth vocal style throughout.

‘This Is Wild Land’ utilises a gentle string arrangement in conjunction with guitar which seems strangely reminiscent of the Bee Gee’s ‘How Deep Is Your Love‘ albeit played at a slightly slower tempo. The song reflects on the limitations we have in controlling and understanding our environment. “You get the sense that Mother Nature has regained the upper hand”.

‘Now, I’m In Favor Of A Wall’ offers an alternative perspective to this contentious subject in American politics which is reframed as a result of changing personal experience. Whether Bob believes this or not remains a moot point, most likely this is an attempt to offer focus through a controversial opinion. As he has previously penned ‘Dystopian Hellscape (For Donald J. Trump)’, we can only assume he is offering us a prime candidate for most misunderstood song of 2020. In this time of fake news, I have some reservations about this presumed ironic songwriting approach and it seems like a tricky number for singing along to, outside of attending a Trump rally.

‘In Terms of Lunar Cycles (It’s a Lonely Phase)’ considers how we can reconnect to produce a new socially resilient connection with our world and each other. “I am interested in a future state where, with care and feeding, we re-integrate with improved perception, at a different speed”.

This is one of the first and is unlikely to be the last musical release relating to the change in our new normal. The creative arts have long offered social commentary, and our experiences of Covid-19 will be no different to other historical events. Amongst other issues, the lack of ability to perform live is having a huge effect on the music industry and this will inevitably translate into the music that is produced. The risk is always whether such a body of work may become irrelevant, misguided or even prescient depending on the future. Maybe this is inevitable with such contemporary songwriting.