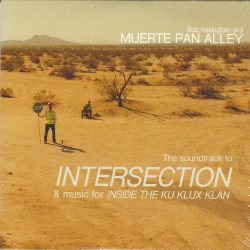 This is a really fascinating release. It’s actually two soundtracks for two different projects. The first fourteen tracks are the soundtrack for “Intersection”, a short film made by American director Brendan Beachman and the second eighteen tracks (yes, you get 32 tracks on the album) are from the soundtrack to “Inside the Ku Klux Klan” from award winning documentary maker Daniel Vernon.

There is some common ground here, so there is logic in releasing the two soundtracks together. Both were originally conceived as, predominantly, solo guitar pieces by composer Bob Keelaghan. He teamed up with bandmates Rob Oxoby and Jay Woolley, all previously of Agnostic Mountain Gospel Choir and now working as a three piece in Muerte Pan Alley, to expand and record the tracks.

The problem with soundtracks is that, to get the best from them, you really need to hear them in context with the film they were composed for. Luckily that’s not too much of a problem here.

“Intersection” is a dark comedy/fantasy about what happens when a meteorite lands near a couple of road workers at a desert intersection. The film only runs around 20 minutes and you can see it on YouTube – and it’s worth seeking out because, not only is it entertaining, it puts Keelaghan’s compositions into context. “Inside the Ku Klux Klan” was originally shown on Channel 4 in the UK and it was an excellent documentary that took an inside look at the reviled White Supremacist organisation and where it stands in modern day America. Again, it can be found on YouTube and on various TV catch up services and is well worth seeking out.

Watching both these excellent films you realise what a great job Keelaghan did in scoring the movies – they are both very good examples of the art of soundtracking. From a musical perspective the tracks are also extremely good. We get an eclectic mix of Americana, Psychedelic Blues, Stoner rock and pretty much all stations in between and there’s some outstanding musicianship throughout the album. How these soundtracks came about is, apparently, down to both directors contacting Keelaghan about using music from his cult alt country band, Agnostic Mountain Gospel Choir, for their projects – but, in both cases, the conversation eventually turned to him producing original scores but based on the output of AMGC.

This is good music and you get a lot of it for your money – but the appeal is always going to be limited because these are soundtrack recordings. As is often the case, the majority of the tracks are instrumentals and they  only make real sense when you hear them with the visuals they were composed to support. What they may well do is encourage listeners to seek out other recordings by Muerte Pan Alley or even delve into the archives of Agnostic Mountain Gospel Choir.

Keelaghan is one to watch and listen out for in the future – there is a very creative mind at work here.