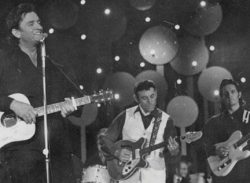 RS Country reports on another recent death by way of a chat they recently had with legendary Guitarist Bob Wootton who joined Johnny Cash’s band in 1968, “the only man who could fill the shoes of the late Luther Perkins. Within less than a year, he was accompanying the Man in Black at one of Cash’s most infamous concerts at San Quentin State Prison in California, and he would continue to be a mainstay in the band until Cash’s retirement from touring in 1997. This past February, Rolling Stone conducted an interview with Wootton, who died Sunday, about the concert that would become 1969’s At San Quentin for an upcoming article. At the time, his wife and manager said that because of health reasons, he could only do an interview via e-mail. It took Wootton less than a day to respond with insightful, candid answers that reflected the pride he felt playing alongside Cash. Wootton’s wife reported that the interview made him smile as he reminisced. Here is everything Wootton had to say about playing with Cash.

What do you remember most about playing San Quentin? I had just started to work with John in September of ’68. We had been in the studio recording Hello, I’m Johnny Cash when the opportunity came up to do San Quentin, so John put that record on hold and we left for California. I remember walking through two sets of iron gates when we got there, and when I heard them close, I thought, “Man, I hope we get back out of here.”

John was very solemn that day. Really, we all were. It reminds you of how much you take for granted things like being able to walk and go wherever you want to and to talk to whoever you want to. It was a very sobering moment.

The men in the audience were very noisy and happy. John connected with them in a way that I never saw him connect with another audience. They were also very respectful of June [Carter Cash] and her family. They could be rowdy but then you could look out and see those grown men with tears rolling down their cheeks. That one show left an impression on me I will never forget.

How would you describe Johnny Cash as a bandleader at that time? John was never a hardnosed boss. He was always like your buddy. He expected you to give 100 percent on the road and do your job. If you did that, you had no problems.

How did he run things? On the record, he talked about playing whatever the audience wanted to hear, so how did he pick the songs? John always had a standard list that he used as a guide, but he never went strictly by that list. If the crowd wanted to hear something, he would do it, but remember John knew his audience and he always had a great feel for picking his songs and for writing them.

Cash cursed a lot during the show, which the audience loved and the record label bleeped. What was the general vibe in the band at the time? It sounds like such a loose, fun group to play in. We were a family. I have always said I was closer to the people on the road than my own family. We worked, traveled and played together. We celebrated holidays, birthdays and anniversaries together on the road. When you talk about John cussing, this again is John knowing his audience. This show was right at the beginning of John starting to turn his life around. Really, I think he done it more to thumb his nose at the record company than anything else, but with that being said, John was a man’s man.

At the show, Johnny talked about how Luther Perkins, who played on the At Folsom Prison album, had passed away and that you had come in and were doing a “wonderful job.” Was it hard filling those shoes? How did Johnny work with you and welcome you into the group? How was it playing with Carl Perkins? Luther passed away in August of ’68, and I was hired in September. I had been working in Tulsa, Oklahoma, at a club out there and the audience would always request a Cash song, but my guitar player couldn’t play the sound so I decided to do it myself. It was extremely easy for me, almost like breathing. It was just natural. I always believed God had a hand in all of it and guided every step I took.

From the moment I met John in Fayetteville, Arkansas, and played guitar, he never said, “Play it like Luther.” He didn’t have to. I had learned every song note-for-note, but added little things that only a true fan would have noticed. I never wanted to do anything to dishonor the memory of Luther Perkins, and I never have. He and Marshall Grant created the Cash sound, and I loved it!

I roomed with Carl Perkins; W.S. Holland and Marshall Grant shared a room. Carl Perkins was one of the funniest men I have ever known and you talk about owning a stage … that guy could do it. You know W.S. had previously worked with Carl, so again this was one big happy family on the road.

Were you nervous at all about playing in a prison? Did it ever feel like the inmates might get out of hand and riot?  I was most nervous about walking through those gates. You see the guards on the wall and in the towers and they all have their eyes and guns pointed in your direction. You don’t ever forget that. I always felt in my gut that this was going to be a defining moment and it was. I believe the inmates truly appreciated our being there and looking back I was never afraid they would riot. Some people have hinted John was trying to get them to, but that’s not true. John just put himself in their shoes for that show and sang from his heart and spoke the way he believed they would want to if they could.

What do you remember about the audience at the show? They cheered so loud after Johnny sang, “San Quentin, I hate every inch of you.” Also, what do you remember about the audience requesting you to play “San Quentin” again? The audience was there to be entertained. These were men whose every waking moment was planned for them. This show helped them forget where they were and to feel human for a couple of hours. “San Quentin” will always be one of my favorite songs to play, but I always got more requests for “Wanted Man”.

What do you remember about debuting “A Boy Named Sue” at that show? “A Boy Named Sue” we thought was a joke. Never did John or anyone else expect it to do what it did. I remember John pulling this poem out of his briefcase, reading it and we just started playing behind him … nothing special. We thought it was very funny. Lo and behold, John added it during the show. No rehearsal, no practice, that was it. Signed, sealed, recorded and a hit.

Lastly, what do you remember about dealing with the TV crew? I’ve read that Cash flipped the bird to one of the cameras because he thought they were blocking the prisoners’ views. The TV crew could not have been nicer. They were very respectful of where they were and who could blame them? That was a tough audience, not a bunch of sissies.

That infamous bird [photo] was always for the record company and the Nashville establishment. Johnny Cash was always a rebel and he never liked labels. He certainly didn’t like for anyone to tell him what he could or could not do.

Personally, I think the best thing that ever happened to John was Rick Rubin, because he allowed John to be himself. Columbia records treated John dirty. In my opinion, Johnny Cash made Columbia Records and he put Nashville, Tennessee, on the map with his television show. John was the first person to brand Nashville as Music City. If John would have teamed with Rubin sooner, it would have been great. Johnny Cash went out of this world on top and, to me, he was the best there has ever been or ever will be. He was my friend, my brother and I was his biggest fan. There is not a day that goes by I don’t think about him and June, and I miss them both. I will always be grateful they let this guy on the train. It was one hell of a ride.