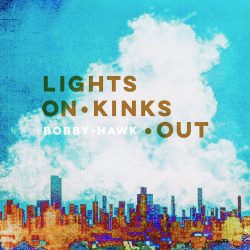 Bobby Hawk (born Robert Hecht for those who have a hankering to know the detail) has been immersed in music for as long as he can remember. Born in central Illinois, his multi-instrumentalist father brought him to gigs throughout the Midwest and it was a natural progression for the talented fiddler to gravitate towards others with similar talent and a common interest in jazz, bluegrass and country. It wasn’t long before he became a full-time musician and with the bright lights of New York having tempted him to move east, he found himself playing with luminaries such as Abigail Washburn and Noam Pikelny.

That brings us his first album, ‘Lights On Kinks Out’ and as with many debut efforts, it was the break-up of a personal relationship that spurred Hawk into action although it seems more chance than in-depth planning that he ended up in the studio and as Hawk himself says, “Fiddle doesn’t really lend itself to songwriting the way the guitar does, so it was amazing to pick up the guitar and be able to process this new stage of life in a different way.” After sharing some of this work with friend and producer/multi-instrumentalist Ryan Hommel, Hawk’s therapeutic exercise began to take shape. “I just played him a snippet of this little ditty on guitar. It wasn’t really anything to write home about. But he was really enthusiastic about recording this stuff and it quickly went from a fiddler noodling on a guitar like a novice to us making the album.”

Hawk and Hommel are clearly well connected and they assembled a lengthy list of talented musicians such as Ana Egge, Seth Gillier and Zara Bode, and given his varied musical background, it’s no surprise that ‘Lights On Kinks Out’ is a difficult album to categorise with bluegrass undertones on ‘Salt and Liquor’ and his jazz leanings making an appearance on ‘Let Things Go’.  Hawk’s baritone vocals act as the glue holding things together as he rides an emotional gamut of love lost and found.

‘Light On Kinks Out’ takes a bit of effort to get to grips with. For this reviewer at least it took multiple attempts to start to enjoy it. On first listen it seemed that that one of the strengths of the album was also its biggest weakness. Hawk has a deep baritone voice but his relative lack of range made it seem all too similar but (warning cliché time ahead!) it does grow on you and the varied arrangements, with some fine fiddle playing in the mix, helps lift what otherwise could have been a very dull album. All in all, Hawk has done a solid job with this debut effort and it will be interesting to see and hear where he goes from here.