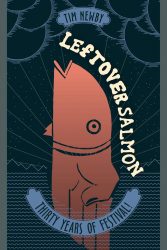 There are few better mediums than a book for opening our eyes to new information, for helping us to become a little more knowledgeable about the world around us. I have to put my hand up and say I had never heard of Leftover Salmon before reading this book and I only had sketchy knowledge of the progressive Bluegrass scene, so this book “Leftover Salmon: Thirty Years of Festival!” has been a real revelation; a window into a different and quite fascinating world.

Leftover Salmon have been an active force in the world of Bluegrass for some thirty years now, with the individual members of the band clocking up even more mileage between them. Tim Newby’s book goes into considerable detail on the fascinating characters behind this band and the history of a group who tore up the rule book on Bluegrass bands and became a staple of the progressive Bluegrass scene that has built up around Boulder, Colorado.

Initially focusing on the individual lives of the three mainstays of the band, Mandolin player Drew Emmitt, Guitarist Vince Herman and Banjoist Mark Vann, the book tells their individual stories as it weaves the different threads of these three main characters together until they all coincide with the formation of ‘Leftover Salmon’ in 1989, as members of the Left Hand Band and the Salmon Heads combine to play a New Year’s Eve gig. That band then go on to have a thirty year career that is still going and, though some of the other musicians have moved on and been replaced, the “big three” stayed at the front of the band until Mark Vann’s untimely death, from cancer, in 2002.

They say that the best bands often have a “gang mentality” about them and it certainly seems that Emmitt, Herman and Vann needed to find each other for ‘Leftover Salmon’ to happen. They’d played in various different combinations in other bands before but it was only the combination of the three of them that made the band, and their vision of what Bluegrass music could be, a reality. It was them, and the few who bought into their ideas and direction, against the world.

The author pulls together interviews with current and former band members, as well as contributions from musicians and others around the Bluegrass scene, that paints a picture of a band who knew what they wanted and set about making it happen with determination and a work ethic that is more than admirable – but the book is about so much more than this impressive bunch of musicians.

Not knowing much about the Bluegrass scene I found the real fascination of this book to be the insights into this weird and wonderful branch of roots music along with the development of progressive Bluegrass and the Jamband scene that has grown up alongside it and which it feeds into and off of. Leftover Salmon’s big contribution to this scene was their decision to combine traditional Bluegrass playing with the workings of a modern rock band. Emmit, Herman and Vann did away with the old school, cluster round the microphone approach and, instead, positioned themselves as the three front men of the band. Then they added a typical rock band rhythm section of drums and electric bass, backed up with a keyboard player. Like early influencers Hot Rize and New Grass Revival the band embraced contemporary songs and their own compositions but their other innovation was to tie themselves to the Jamband scene more commonly associated with bands like The Grateful Dead and Little Feat – bands that would take themselves off into long, intricate jam sessions around a single song, allowing members of the band to solo extensively and play off each other.

They also developed their own special rapport with audiences; telling stories from their life on the road and engaging with their followers as friends rather than more distant artists. This sort of approach was unheard of from more traditional Bluegrass bands and further underlined Leftover Salmon’s intention to travel their own road. It’s a style of music that is particularly suited to festival performance and it’s no coincidence that Leftover Salmon have become a very big draw at the various Bluegrass and Jamband festivals that take place around the U.S throughout the summer – thirty years of festival and still going strong!

All credit has to go to writer Tim Newby for his extensive research and for creating a book that can generate so much excitement about a band and a music that had previously passed me by.

This book really does open your eyes to another world and I defy anyone to read this and then not go out and start researching Leftover Salmon and the Progressive Bluegrass movement. I’m already trying to work out how I can get to next year’s Telluride Bluegrass Festival!

A fascinating ride into the world of Progressive Bluegrass